‘LGBTI panel is not a black stain on universities!’

An LGBTI organization started a petition following the decision of the rectorate of Inonu University to ban the panel to which Kaos GL was invited. 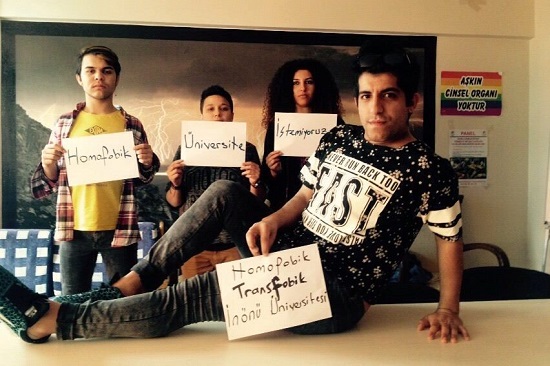 An LGBTI organization started a petition following the decision of the rectorate of Inonu University to ban the panel to which Kaos GL was invited.
"We do no want homophobic universities"
After the rectorate banned the panel on LGBTI rights at Inonu University in the eastern city of Malatya, reactions from social media and LGBTI organizations ensued.
Protest and petitions on social media
Many users on social media criticized the homophobic stance of the university administration through the hashtag #HomofobikİnönüÜniversitesi.
The panel was to be held as a part of Rainbow Coalition Against Discrimination, organized by Kaos GL and Pink Life associations. LGBTI platforms under Malatya Rainbow LGBTI initiative have started a petition against the banning of the panel.
The panel titled “Gender and Sexual Orientation” was organized by the PDR Group and among the participants was Kaos GL. The petition has been written as a reaction to the fact that the panel was not found appropriate by Inonu University’s administration. The petition condemns the justification of the said ban by the administration which states that they “do not want to be associated with these matters” and notes below points:
“We will not be deterred by the attitude of the rectorate!”
The administration is said to be refraining from association with the subjects of LGBTI, sexuality, gender identity and sexual orientation on the grounds that these are threatening for the university. Furthermore, the administration claimed that the panel was rejected because Ali Erol and Evren E. Cakmak from Kaos GL Organization are not “agreeable people”.
“If the panel was held, it would have been a local activity of the Rainbow Against Discrimination project, supported by an EU Delegation, and the Pembe Hayat and Kaos GL organizations.”
“We condemn the HOMOPHOBIC and TRANSPHOBIC stance of Inonu University! The Rectorate should recognize the fact that panels that are/will be organized on the subjects of ‘LGBTI, sexuality, gender identity, sexual orientation’ are not ‘black stains’ and that they have a great role in the training of all professional fields. We know that just like all realms of life, Inonu University is an educational institution with students of diverse identities. In the street, at work, in the parliament and schools; we have existed, we do exist and we will continue to show our existence! Therefore, the attitude carried by the rectorate will not deter us but on the contrary it will strengthen our struggle against homophobia and transphobia.”
The petition is open to individual signatures as well as institutional signatures. To support the campaign, you can sign the petition here.
Translation: LGBTI News Turkey