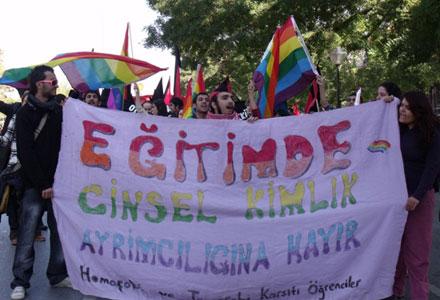 Students Against Homophobia and Transphobia published a notice for the foundation of The Council of Higher Education (YÖK) on November 6:
It has been years since our campus police -YÖK- was founded. Hurting anyone against standardization, this cruel institution is no different than it was founded. Instead of soldiers of times of military coup, now there are private security guards and civil fascists in our campuses. Flowers have been replaced by tear gas developed in some laboratory somewhere in the world.
Are there any changes in its mentality or aims after some “radical” changes in YÖK system?
Education system continues to smash individuals to make them all alike. Heterosexist mentality leaves no one alone. It makes women mothers, men soldiers, the white bankers, the black slaves; and it does not forget about gay, lesbian, bisexual and transgender students, too. Their identities are constantly being conquered.
Until the elimination of homophobia and transphobia from campuses!
Education system dismisses LGBT individuals!
“Highly democratic” universities do not allow LGBT students to get organized!
University administrations support harassment, violence and pressure on our living areas.
Say No to Heterosexist Education!
We, Students Against Homophobia and Transphobia, are not willing to sacrifice our individuality and freedom. Either it is called YÖK or something else, we will not let education system destroy our lives.
Students Against Homophobia and Transphobia
Translation: Ömer Akpınar