The speech Maurice Tomlinson, the first laureate for the award, has given during the ceremony for 2013 David Kato Vision & Voice Award on 29th November at the Pan-African Parliament in the South African city of Johannesburg: 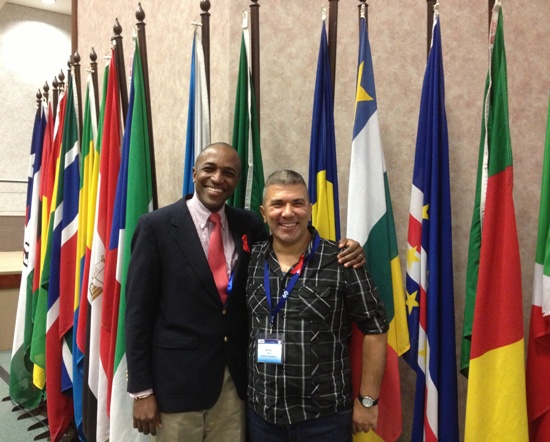 The speech Maurice Tomlinson, the first laureate for the award, has given during the ceremony for 2013 David Kato Vision & Voice Award on 29th November at the Pan-African Parliament in the South African city of Johannesburg:
Access changes attitudes. This is true of any civil rights struggle. If you are not at the table, you can’t challenge the hateful rhetoric your opponents will relentlessly try to pour into the ears of politicians and policy makers who you need to convince. The David Kato Vision and Voice Award provides this access on a global scale and as the inaugural winner of the award, I have been able to amplify the message of my organization, AIDS-Free World, about the disastrous impact Caribbean homophobia is having on the regional HIV response.  As it stands, Jamaica has possibly the world’s highest rate of HIV infection among MSM (32.9%) but, sadly, those charged with addressing the cultural and structural barriers to life-saving tolerance messaging are more concerned about pandering to fundamentalist religious views than actually saving lives.
For this reason, I am glad that the David Kato Vision and Voice Award allowed me to be selected to deliver speeches at numerous conferences addressing the link between homophobia and HIV.  Perhaps the most significant for me was the opportunity to represent the voices of the global MSM community at the launch of the ground-breaking report by the Global Commission on HIV and the Law sponsored by the United Nations Development Programme.  I realize that I may have upset a few UN officials when I publicly expressed my concern that the UN is shrinking back from boldly condemning counties that still maintain stigmatizing and discriminatory laws and practices which severely compromise the HIV response.   But that is exactly what Civil Society activists have to do.  We must never forget that our constituents are the millions of voiceless individuals who cannot advocate for themselves, either due to a lack of resources or simply lack of access.  By providing both an unrestricted discretionary cash prize and vital publicity, the David Kato Vision and Voice Award makes our job as activists that much easier.
Being an activist can be a lonely business. Sometimes, even the groups you are advocating for will turn against you if they think you are making too many waves in their tranquil sea of complacency.  Again, this award reminds you that you are not alone, that your contributions - though sometimes controversial - matter, and that most of all, you are not being ignored.
In my most trying and lonely moments as an activist, my amazing organization, AIDS-Free World constantly reassured me that I am apart of global movement for social justice.  The force and strength of the organization’s global advocacy which supports and facilitates my views makes a big difference in its cumulative impact. Through the resources and time they made available, I was able to be a part of the first ever legal challenge to the Jamaican Anti-sodomy law before the Inter-American Commission on Human Rights, successfully challenged Coca-Cola for their support of homophobic murder musicians in Jamaica, launched a Constitutional claim against Jamaican television stations for their refusal to air a tolerance themed ad in which I appear, confronted the government of Trinidad about its atrocious Immigration Law which bans the entry of marginalized groups such as the disabled, homosexuals and sex workers, and also traveled the world to share with other LGBT advocacy groups the hard won skills I developed as an activist.  It was also AIDS-Free World that nominated me for the David Kato Vision and Voice award. I simply could not have achieved my advocacy successes without them by my side.  So I publicly thank AIDS-Free World and hope my successor has an equally supportive organization or group to call “home.”
I have many pleasant memories as a result of winning this award and I hope my successor will experience many more.  For example, my mother, a fundamentalist Christian who still struggles with accepting my orientation, and even more so my activism, said that being recognized in this way must mean I am doing SOMETHING right.  The award also helped me to partly realize my dream of carrying out LGBT sensitivity training for Caribbean police along with my husband, Rev. Tom Decker of the Metropolitan Community Church.  Further, I was able to visit the White House and listen to the newly reelected President of the United States, Barack Obama, deliver a memorable speech celebrating the work of LGBT and HIV and AIDS activists.  Most amazing however was the tremendous opportunity of being the Grand Marshall at the 1st Uganda Pride March on August 4, 2012.  I felt privileged to represent David and march with my incredibly brave Ugandan brothers and sisters.  I hope this event will become be an annual one
So, to this year’s winner of the David Kato Vision and Voice Award I say, enjoy this well-deserved recognition of your pioneering and important work.  And then boldly use this award as a platform to make the world a better place for all LGBT.  The team at IPPF are wonderful at facilitating introductions to world leaders, and be prepared to challenge these persons with specific “asks!” Don’t be intimidated!  You have earned your right to speak up against LGBT injustices.  Do so, in the spirit of our dear David who is no longer with us, but whose legacy continues to inspire through this incredible honour which bears his name.
Aluta continua!
Photo: Hakan Şatıroğlu / Johannesburg