Mersin 7 Colors LGBT in the Mediterranean region is one of the many LGBT organizations across Turkey that celebrated World Peace Day on September 1st. 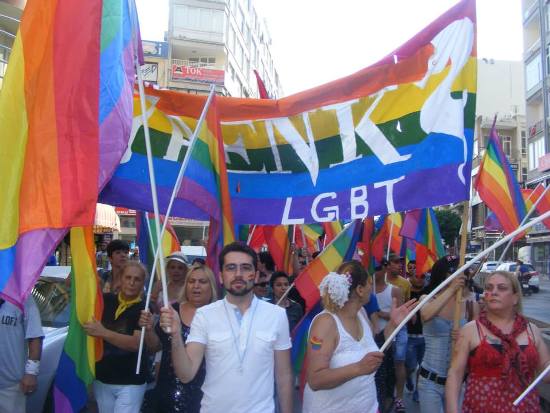 Mersin 7 Colors LGBT in the Mediterranean region is one of the many LGBT organizations across Turkey that celebrated World Peace Day on September 1st. Their enthusiasm and their presence in a demonstration outside the metropolitan areas of Istanbul and Ankara is important to draw attention to.
“You cannot bring peace and tranquility to this country unless you take the steps to eliminate homophobic and transphobic hate and secure LGBT rights in the constitution”
Mersin LGBT 7 Colors Community stated that the way to social peace goes through making peace with LGBTs, as they took part in the “International Day of Peace” in the southern city of Mesin on September 1st.
The LGBT community carried rainbow flags and a big “Mersin 7 Colors LGBT” banner. They took part in the Peace Walk and then joined the rally in Atatürk Street and were the center of attention for all other groups and citizens during the activities.
7 Colors members started the day at 1:00 PM with breakfast in the association building that is currently in the foundation phase. After breakfast they prepared for the Peace Walk with enthusiasm and at 4:30 PM they gathered in front of the building to start walking from İstiklal Street to İstasyon Square. There, they joined the corteges of the Kurdish and leftist parties Socialist Democratic Party (SDP) and the Socialist Re-establishment Party (SYKP) and walked together to İstasyon Square. The group of 7 Colors was about 100 people, shouting slogans and sharing their voice during the Peace Walk in Mersin. When the Peace and Democracy Party (BDP) joined the cortege in İstasyon Square, they continued their slogans as they walked together to the Mersin Metropolitan Municipality.
We Want Peace, Ayol!
LGBT entities in Adana such as Queer Adana and The Gay Initiative of Çukurova supported 7 Colors and took their place in the cortege. The whole group shouted slogans during the walk and reached Atatürk Street: “The homophobic government will certainly fall!”, “No to war, we want peace and we want it now!”, “Do not be silent, shout that homosexuals exist!”, “Do not be silent, shout that transsexuals exist!”, “The world would shake, if homosexuals were free!”, “Ah, oh, ah, oh!”, “Where are you, my darling? I’m here, my darling!”, “We want peace, ayol!”, “In school, at work, in parliament, homosexuals are everywhere!” 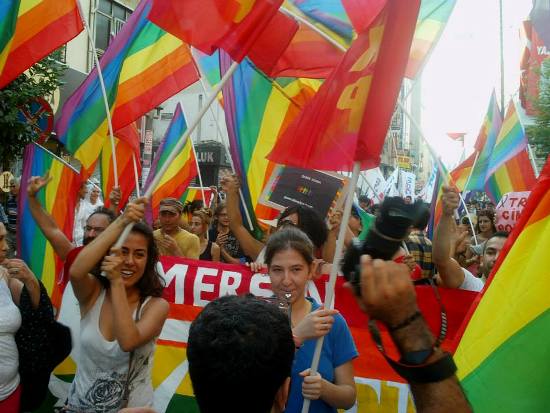 You cannot squeeze LGBTs into a “preamble”:
On behalf of LGBTs, the 7 Colors spokesperson Tuna Şahin gave a press statement and emphasized that, without making peace with LGBTs, a total social peace cannot be accomplished: “One of the most important steps to take towards peace is to make peace with LGBT society because as long as the undeclared war against lesbian, gay, bisexual and transsexual people is not stopped, it is not possible to talk about real peace. LGBT people exist in every part of society and they will keep existing. Moreover, LGBT people resist discrimination and persistently exist in all kinds of societies. As Turkish gays, Kurdish lesbians, Alawite transsexuals and non-Muslim bisexuals…
In short, nobody should try to make us the other of the other because we exist in every single social structure. We are everywhere.
In spite of this, the war against LGBT society forces us to hide ourselves, prevents us to honorably express ourselves and exposes us to all kinds of difficulties and iniquity if do not hide. They turn us into a target of hate. 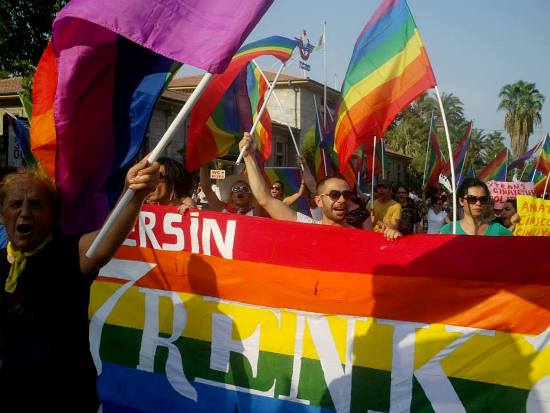 Patriarchal, rotten heterosexist moral attitudes and religious fanaticism kill homosexual people. Here, I call upon the sovereign powers, the ruling Justice and Development Party (AKP) and its extensions within the state; you cannot squeeze LGBT into a “preamble”. Given the incremental increase of homophobic and transphobic murders, you cannot bring peace to this country without steps towards extinguishing hatred against LGBT people and without securing LGBT rights in the constitution.
Furthermore, we wish the end of war provocations and blood in the Middle East and the world for the sake of humankind.
Support from citizens:
After the statement, 7 Colors members livened up people’s enthusiasm with their slogans. Accompanied by drums and clarions LGBTs danced the peace halay (Anatolian folk dance) and BDP Mersin Parliamentarian Ertuğrul Kürkçü joined the halay and supported LGBT. 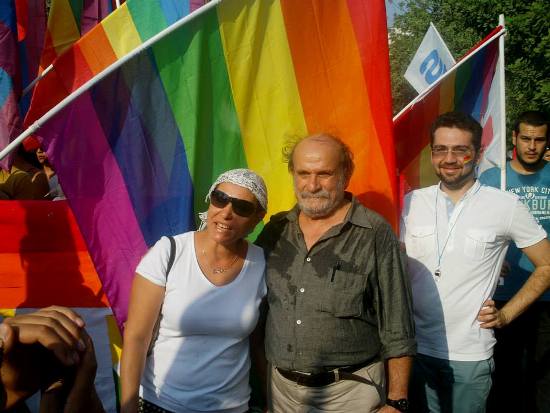 *Ayol is an exclamatory word associated with femininity and taboos and can mean “well”, “hey”, “wow”. The word itself has been in use in colloquial Turkish and underground LGBTI culture, however, its full and current appropriation by LGBTI organizations is a recent phenomenon that started with the Gezi Resistance in May 2013.  One of the first uses was in a banner “What’s forbidden, ayol!” during protests on Istiklal Avenue in Taksim, Istanbul. “Ayol” has been appearing as graffiti across Turkey since then. “Resist ayol” was used as a hashtag for 2013 Pride Week. Its importance is rooted in the fact that though “ayol” was used by LGBTI organizations, it has been accepted and appropriated across groups in the Resistance. One explanation for its popularity can be found in the feeling that the word transcends and frees traditional gender roles and power relations; it imparts a sense of freedom…
Translation: LGBTI News Turkey