On What Grounds Parliament Access to KaosGL.Org is Blocked?

CHP Ankara deputy Aylin Nazlıaka asked Prime Minister Erdoğan the reason of the blockage of the internet access of Turkish Grand National Assembly for the web sites of the non-governmental organizations of LGBT. 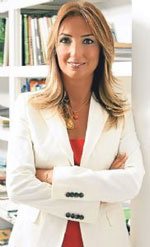 CHP Ankara deputy Aylin Nazlıaka asked Prime Minister Erdoğan the reason of the blockage of the internet access of Turkish Grand National Assembly for the web sites of the non-governmental organizations of LGBT.
Nazlıaka, who tabled a motion of censure on what kind of measures will be taken by the government for the discrimination against LGBT individuals, waits for Prime Minister Erdoğan’s reply.
’What is the reason for blocking the access to kaosgl.org?’
Deputy Nazlıaka reminded the phrase ‘sovereignty rests unconditionally with the nation’ written in the General Assembly Hall of TGNA and indicated the fact that the Assembly is the place for representation of all citizens is an indisputable truth in the motion of censure.
Deputy Aylin Nazlıaka explained that it is needed to fill a special form in order to access the web sites of LGBT associations and asked Prime Minister Erdoğan the reason of this implementation:
’What is the justification of blocking the internet access of TGNA to the web sites of non-governmental organizations such as Kaos GL and Lambdaistanbul with the definition of ‘homosexuality’?
‘The discriminatory treatments against LGBT in the Assembly are unconstitutional!’
CHP Ankara Deputy Aylin Nazlıaka emphasized that the treatments in question reinforce the discrimination against LGBT individuals who have been defined as ‘ill’ by Aliye Kavaf who has been minister in the previous legislative session.
Nazlıaka criticized the discriminatory perception and asked ‘ Is not it unconstitutional, regarding that the Constitution is based on the equality of all citizens, that the discriminatory perception takes place in Turkish Grand National Assembly?’
Censorship and discrimination!
Nazlıaka mentioned that The Subvention Project for the Publication of Turkish Cultural, Artistic and Literary Works in Foreign Languages (TEDA) withdrew from supporting the translation and publication of Perihan Mağden’s novel, ‘Ali ile Ramazan.’
Nazlıaka said ‘Our country will be defined as not only censor but also discriminatory against LGBT individuals on the international platform.’ and asked ‘What is the reason for TEDA’s refusal to the demand of supporting the translation of Perihan Mağden’s novel ‘Ali ile Ramazan’?’
It is expected that ‘the motion for resolution’ that was tabled by CHP Ankara Deputy Aylin Nazlıaka will be replied by Prime Minister Erdoğan in the new legislation year that will commence on the 1st of October.