Open Letter from the Women’s Studies Students: ‘No, we are not going!’

Students and graduates of Ankara University Women’s Studies Department invites everyone to take action with solidarity with their exported academicians in their declaration. 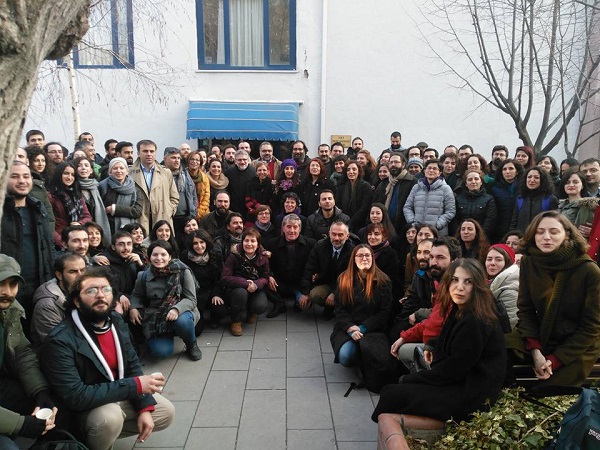 Students and graduates of Ankara University Women’s Studies Department invites everyone to take action with solidarity with their exported academicians in their declaration.

In the open letter written by the students and graduates of Ankara University Women’s Studies Department, they declared that they will not accept the unfair and unlawful suspensions of their teachers from the academy:

“As the students and graduates of Ankara University Women’s Studies Solidarity Group, we don’t accept the unlawful and unfair dismissal of our teachers from the academy!”

“As the students and graduates of Ankara University, Women’s Studies Program, which have been giving graduate education since 1996, and contributing to the forms of thought and action for more than 20 years, it can’t be expected from us to be silent in such a period in which scientific thought and freedom of expression have been under siege.”

“On the 10th of February, 2017, when academic freedom and free thought have been violated under the boots of the police who has blockaded the Cebeci Campus, Maryam Ostadi, a student in the Women’s Studies Program has been beaten by the police. Moreover, both our friend and our teacher Assoc. Prof. Dr. Emel Memiş were taken into custody. Many public officials who are students and graduates of Women’s Studies Program have been dismissed unlawfully as they have defended peace, democracy and equality just like our teachers. At both Ankara University’s other departments and at other universities the same process have been experienced and a lot of academics have been taken away from universities with the Decrees.”

“In fact, all these events have started with the Rector Erkan İbiş’s administration. In this period, our teachers who have advocated peace and nonviolence have been declared guilty and subjected to investigation. While they have been  pointed as a target by the partisan newspapers Akit and Vahdet, which think that gender studies is a “heresy”, the administration of the university has been a mere spectator and has limited the quota of the applications despite the hundreds of applicants. We have learned that Erkan İbiş, who has been trying to restrict our living space, is also responsible for the suspensions! We are urging Erkan İbiş, who is responsible for all this unlawfulness, to resign!”

“Decrees mean dismissal and obligatory retirement, the courses that will not be opened, the students that are left without a supervisor, the dissertations that are hindered to be finished and a department that is left without an administrator. At the same time, they mean the hindrance of the academics, who defend gender equality, peace, democracy and freedom of expression, to share these values with their students and to reproduce them. They mean  the control of the dream of an equal and free world, and the control of the thought that goes after that dream. They also mean to be left without peace and the amenities of life by the use of custody, oppression, violence, fear and sorrow. The Decrees mean unemployment, precarity and a life that is deprived of all public rights.”

“We have met in the Women’s Studies Program with our different experiences. As a group of students with different backgrounds, we could come together only with feminist thought and wealth of knowledge. We have experienced to be together without any hierarchy, to produce together and to act with solidarity in this department. No matter what happens, they will never be able to destroy our richness and beauty! They will never be able to take us away from our teachers, friends and our campus! We believe that our teachers and friends will return and we will struggle for their return!”

“Do not think that Women’s Studies Program, which has brought academics, activists, laborers, artists and people from different groups that we haven’t mentioned here together with feminism in Turkey, and encouraged them to produce together, needs a specific space! Being a student in the Women Studies Program doesn’t only mean to produce in an academic environment. It also means to produce the daily experiences, to produce the knowledge of the street  and life, and to learn from it. Knowledge spreads! Life spreads! We are everywhere!”

“Just as Funda Şenol Cantek, the Head of our Department, has stated “Academy has spread across the  streets. And this will be a thorn in their side!”