June 5, 2011&lt;br /&gt;Kaos GL (Translated from Turkish by Kıvanç Tanrıyar)&lt;br /&gt;&lt;br /&gt;People against homophobia and transphobia, arriving from Caucasus, Middle East and Balkans, meet and turn their face to each other within the scope of International Meeting Against Homophobia.

People Against Homophobia, arriving at Ankara on the 20th of May for the first meeting of 'Regional Network against Homophobia', comprised of the representatives of LGBT organizations from Bosnia-Herzegovina, Serbia, Croatia, Palestine, Israel, Armenia, Georgia, Macedonia, Greece, Monte Negro, Egypt and Iran together with those from Turkey.

Kaos GL, calling for bringing about an LGBT Network of Middle East, Caucasus and Balkan countries for the solidarity of struggle against homophobia, took the responsibility for the preparations concerning organization, and opened its doors to this meeting.

Kaos GL, calling for an initiative for 'Regional Network against Homophobia' on an international basis, received the responses of people against homophobia and of LGBT organizations from 13 countries. The intense attention being paid to the call from regional countries, who could not participate, implies that during the prospective process the initiative of "Regional Network" will be further enriched.

Ali Erol and Nevin Öztop, joint coordinators of the network initiative, suggested the following in their statements:

"When LGBT activists and people against homophobia of each three regions would be located side by side in one of the "western" countries for the same topic, but in diverse meetings, one would rather pay his/her attention. When we attempted such an initiative as an LGBT organization from Middle East, we were unduly excited. Since we were making our preparations as Kaos GL since long ago, we were almost not anxious. However, we saw that many of our friends were exquisitely concerned. One has to get rid of the blockade of alienation which the political conflicts of our heterosexist regimes bring about, so that we may gather within our regional localities, may have a dialogue against common enemy nationalism and directly against homophobia which is one of its manifestations. How beautiful that our friends coming to Turkey from three regions took responsibility for the sake of common struggle against the blockade of alienation. It has increased our hopes.

In addition, the participation of lesbian self organizations from three countries, added another value and dimension to the Regional Network. Novi Sad from Serbia, Meem from Lebanon and Selanik from Greece shared the knowledge about the movements in their regions within the context of feminism. We will continue with next Regional Network meetings, by emphasizing the feminist formations in these regions distinctively."

"Why nationalists attack at first LGBT individuals, and repetitively?"

When the Lebanese representative talked in the meeting and stated that "When we first initiated the movement, it was said that it were supported by Israel, and this development would ruin Arab society and its youth," it became clear that the situation has virtually been prevalent in each country from the three regions. Kaos GL, had shaped the program of the first meeting just on the basis of this vision.

Psychiatrist, journalist, author Prof. Dr. Selçuk Candansayar, who made a presentation in the forum "What Conceals the Doors Shut by Nationalism?" emphasized these points:

"Nationalism" rubs away individual's opportunity of naming him/herself "me," and forces us to be molded within the mold "us." It does not leave any of our characteristics composing "me," it intertwines with a mold called "us" and takes us captive.

Candansayar, who stated that we grow up by being made filthy through the nationalism in three regions and that we cannot get rid of this dirt, continued:

"Each group wants to feel itself as a unity. Groups define themselves only in relation to the thing "that is not us." Each society, each group – either as a small one or as an exalted nation- defines those who are not themselves, when defining itself.

While we establish ourselves as a power, we define the other, and make an enemy out of it. In truth, they make the power they are subjected to stronger in their countries. Those suppressed, those belonging to the lowest levels of society do not need an enemy. It is those suppressed who always fight. Thus, such kind of nationalism plays into the hands of the power."

"It is impossible to handle nationalism without an enemy. Then, why nationalists attack LGBT individuals at first, and repetitively? For a power creates an inner and an outer enemy within its confines. How many inner enemy is to be constituted, and if we find the inner enemy corrupting our perfect society, our society is purified from microbes. Criminals, prostitutes, those aberrant versus healthy, strong and good individuals are cleaned through the discourse of the potent. This good individual is a man, is strong, healthy and will continue the race. Establishing the other and defining oneself on the basis of the other, constitutes power among those suppressed as well.

Ali Erol, saluting people against homophobia and transphobia, coming from Caucasus, Middle East and Balkans, on behalf of Kaos GL, said the following in his inauguration speech:

"Even this first meeting of Kaos GL, Middle East, Caucasus and Balkan "Regional Network" for the struggle against homophobia initiation, excited us exquisitely, and results in returns which increase our hopes and confidence, which means an organizing and expansion of the Network in the prospective process. In this context, I want to introduce my thanks on behalf of Kaos GL to our dearest brothers and sisters who show the courage and take the responsibility to participate in this historic meeting and I am honored to salute you once more."

"I feel happy to be a participant of this network in the face of the heterosexist and nationalist blockade, and want to salute as well Turkish and Kurdish LGBT organizations and their dearest representatives who want to liberate themselves together with their LGBT brothers and sisters of Caucasus, Balkans and Middle East."

"We have sufficient governments and bad politicians in strife! We may establish a dialogue without ever being some replicas of those bad politicians. We may not agree in every aspect, but we may make an ethical choice concerning dialogue and solidarity, and we may insist upon it. Our struggles may develop solely by being nurtured by each others' struggles through such an ethical choice. Solely thanks to this development we may expand the spheres where we are breathing and may liberate ourselves together."
Annual conferences of the "Regional Network" will continue. Besides, meetings among countries and local meetings of each region will be executed. In the agendas of prospective meetings the topic concerning partners and comrades in the region will gain importance. Interregional and intraregional meetings will be followed closely for the sake of intensification and extentionalization. 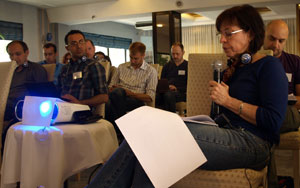 Text of justification, being prepared by KaosGL who plans to create Middle East, Caucasus and Balkan Countries LGBT Network for solidarity in struggle against homophobia, may be found in:

The participants of the "Regional Network against Homophobia" from Bosnia-Herzegovina, Lebanon, Serbia, Croatia, Palestine, Israel, Armenia, Georgia, Macedonia, Greece, Monte Negro, Egypt and Iran spoke to Kaos GL about their country and their organizations before the regional meeting: