PM Erdoğan is No Queer!

Notoriously litigation-happy, PM Erdoğan has found objectionable even the way he is depicted in cartoons. 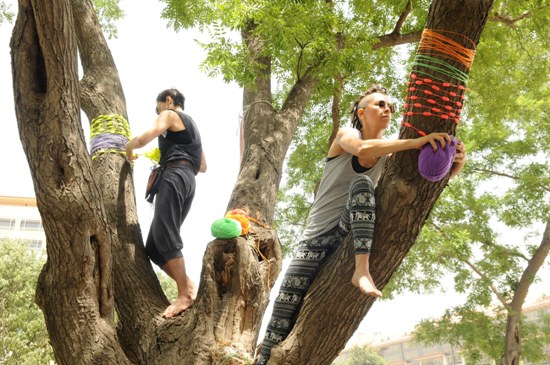 Bahattin Çal of HURPIT (Human Rights Practice in Turkey) evaluates the Turkish Prime Minister Erdoğan’s dislike of criticism.
It all started with the famous protests at Gezi, in the late May and the early June, 2013, when a group of tree-hugging Istanbulites, looking discernibly well-off and well-educated, resisted the administrative plan to transform the Gezi Park of Taksim, Istanbul, to a shopping mall without feeling the slightest need to consult the locals, nor taking any heed of the law — a ruling pattern rather clear after the mammoth revisions in the system of education in the country in March 2012, which were effected overnight in the parliament without the knowledge of even the Minister of Education, let alone a multitude of stakeholders in the huge sector. The rest, as known, is history. The increasingly arrogant government led by the Prime Minister (PM) Erdoğan succeeded in exposing the nature of the rule in the country to the entire world within the span of only a few days by arbitrarily hindering this peaceful assembly and, subsequently, as protesters resisted, using callous and highly disproportionate force against protesters, which practically caused the entire thing to snowball into a nation-wide unrest.
It was then that PM Erdoğan stated repeatedly, pointing out the efforts of the government to preserve the environment over the years: we are not about to learn environmentalism from these marauders (çapulcu, apparently a new English word since), having planted during our rule about three billion trees.
As the protests lingered on, read somehow by the PM as none other than an attempt at an Egyptian-style coup (hence the exaggerated, stupefying response of the government to the events over there in July 2013), the PM sought to steal scene apparently this time from Alevis, who had been at the forefront of the protests, declaring: “If being an Alevi is to do with the love of Ali [the son-in-law of the Muslim Prophet, after whom Alevism is named], then I’m an Alevi myself, four out of four (dört dörtlük, hunky dory).”
Soon after this widely discussed statement by the PM, Levent Pişkin, an LGBTI (lesbian, gay, bisexual, trans, intersex) activist, tweeted a half-humourous message: “I now expect from the PM the following statement: I’m queer (ibne, fag) myself, four out of four, and I’m not about to learn being queer from the likes of you.” 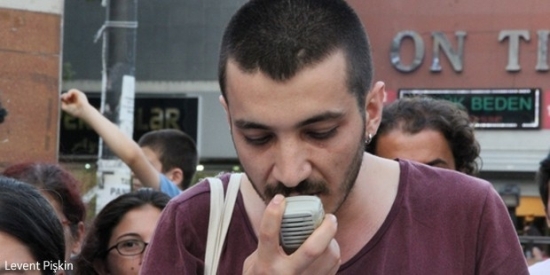 Another message tweeted at about the same time by Hakan Demir, also an LGBTI activist, read: “We now expect from the PM a sortie along the following lines: “We are not about to learn homosexuality from these [marauders], I’m an homosexual myself par excellence, having planted three billion homosexuals.”
It has just been revealed that the PM has sued both activists for criminal libel (Turkish Criminal Code, Article 125), himself ironically committing the arguably libelous act of claiming that the references to “queer” and “homosexual” identities in the tweet messages, by people who are proud to call themselves queer, are plain insults. 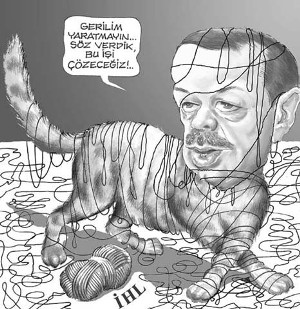 Notoriously litigation-happy, PM Erdoğan has found objectionable even the way he is depicted in cartoons, like the one here to the left, in a political culture that has been no different in the past from the known standards on the issue in European democracies.
For a comparison, Turgut Özal, who ruled both as the PM and President (1983-1993), was known to call up cartoonists and exchange pleasantries with them following the publication of even some rather vicious pieces, often requesting the signed originals from the artists. Whereas the Turkish Wikipedia appears to have a whole item on cartoons sued by Erdoğan.
Intolerant to humor involving himself to this degree, Erdoğan has been simply merciless, needless to say, to some of the critics in the media. Particularly noteworthy are cases of criminal libel he has initiated against intellectuals such as Ahmet Altan and Perihan Mağden, who, ironically, are still hated by the Kemalist political opposition for their support of Erdoğan for close to a decade. At some point, both Altan and Mağden were being dragged from courtrooms processing cases launched by Erdoğan to courtrooms, usually down the same hall, handling cases initiated by the office of the Chief of Staff for alleged assaults on the dignity of the armed forces (Altan), or for supporting conscientious objectors (Mağden).
According to the established case law of the European Court of Human Rights, the limits of acceptable criticism involving politicians should be much wider than those for ordinary individuals, for obvious reasons. Considering, however, that the Turkish court which supported Erdoğan’s claim against the cartoon above depicting him as a cat dates from 2004 (although subsequently quashed by the Court of Cassation), that is, long before Erdoğan was able to control the judiciary, which would come from the early 2011, the extent to which Turkish courts pay attention to the European standards in the matter is clear. Worse, judging from the constant character assassinations of ordinary individuals in the government media, the limits of acceptable criticism for ordinary individuals in Turkey seem to be unbelievably wider than those for politicians, especially when individuals happen to be critics of Erdoğan. 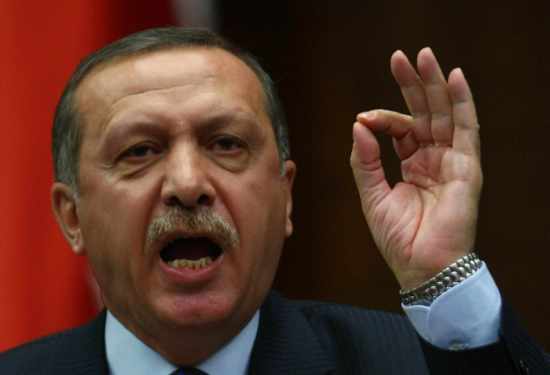 For one of these cases by Erdoğan that ultimately found its way to Strasbourg, to the European Court of Human Rights, see Tuşalp vs Turkey (2012). Sued by Erdoğan for words in a column he contributed to the daily Birgün in 2005, and convicted accordingly, journalist Erbil Tuşalp was vindicated against Turkey by a unanimous decision of the European court for claims about Erdoğan much harsher than those of either Altan or Mağden.