Pride March in Boğaziçi University: Nakka* to the trustee rector!

LGBTI+'s from Boğaziçi University organized a Pride March by saying "Nakka to the Trustee Rector": "We will not stop, we will not give up, we are here, we do not accept!" 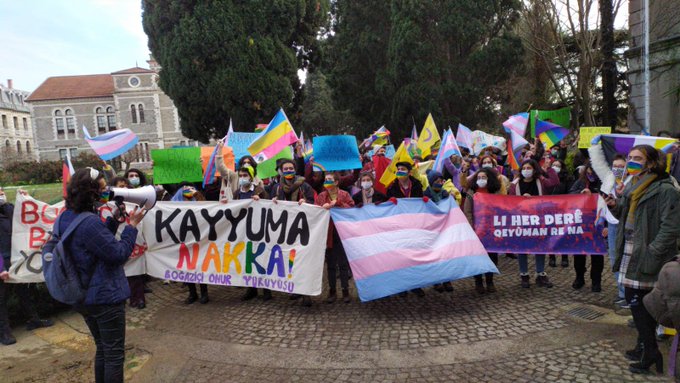 Protests continue against the appointment of Melih Bulu, an AKP candidate for parliament in 2015, as the Rector of Boğaziçi University.

An external rector was appointed to Boğaziçi University for the first time since the 1980s with a midnight appointment made at January 1, 2021, and students and faculty members who declared that they would resist the "trustee rector" continue their demonstrations and activities inside and outside the campus.

As part of the watch against the trustee rector, LGBTI+'s from Boğaziçi recorded the Kayyumşah song, an adaptation of Padişah from Sibel Can. Afterward, Pride March commenced with the call of LGBTI+'s of Boğaziçi University.

The march of Boğaziçi students started from the Rectorship building, of which they changed the name to "Trusteeship", together with banners "Kayyuma Nakka" and "Li Her Derê Qeyûman Re Na".

Students marched to the university's South Campus entrance with rainbow, trans, non-binary, asexual, bisexual and intersex flags. The slogans; "We do not want a Homophobic, biphobic, transphobic Rector", "The world would tremble if trans people were to be free", "Don't be silent, shout, trans people exist", "Don't be silent, shout, intersex exist", "Melih run, run, the fagots are coming", "We are transvestites, get used to it because we are not leaving", "BİMEKS workers are not alone" were chanted often during the march.

In the press statement held in front of the Rectorate building and then at Güney Kapı, it was said, "We will not stop, we will not give up, we are here, we do not accept!".

“We will not stop, we will not give up, we are here, we do not accept!”

The whole statement is as follows:

“We will not stop, we will not give up, we are here, we do not accept!

“We are here, standing against the darkness that makes a murderer out of a baby; against the hatred that tries to differentiate us according to our gender identity, sexual orientation, ethnicity, belief or disbelief, class and language; against the assimilative mindset, especially the appointed trustees, that tries to contain free thought and polyphony. We continue our struggle!

“Those who usurp the freedom of the press by the trustees they assigned to the media organizations and usurp the local people's will by the trustees assigned to municipalities with various excuses today set their eyes upon the universities that should be free and autonomous. The practices of the government that declares anyone not aligned with them as terrorists are still the same: police brutality, media manipulation, scapegoating, organized social media trolls, oppression and fear politics…

“We, as all Boğaziçi University constituents, academicians, workers, students and graduates, have been fighting together against this anti-democratic appointment for 20 days. Because we know this trustee from the previous one. Gülay Barbarosoğlu, who was elected as the rector by taking 86% of the votes in the elections held in our university in 2016, was prevented from taking office. One of the first actions of Mehmed Özkan, who was appointed as a trustee, was to cancel the Hande Kader Scholarship of BÜLGBTİ+ although all the requirements were fulfilled. In the same year, the Queer Performance Night, which was targeted in the pro-AKP media, was tried to be canceled by the trustee. Boğaziçi Pride Parades has been pushed into the South Campus since 2017 as a result of intervention threats of police chiefs. The already inadequate number of genderless toilets which are currently under attack, was gradually reduced.

“Again, through the Özkan administration, the moralist and normative policies of the government were put into practice starting from the Kilyos Sarıtepe Campus, and the libertarian principles of our university were attacked. The mixed dormitories, especially in Kilyos, were abolished, the entrance to the YADYOK building was blocked at night, the security personnel assumed their duty to oppress the students with the courage they received from the trustee.

“In 2018, special operations fprce, who were allowed to enter the campuses by the trustee in the middle of the night, took 5 of our friends into custody by raiding the dormitories at dawn. On the morning of the incident, students who wanted to protest these detentions were dispersed before they were able to make a press statement, by the police that entered the North Campus like an army, and 7 more of our friends were detained. 31 of our friends, who were unlawfully detained for weeks, were battered, tortured and subjected to LGBTI+ phobic violence by the police. The process that started with the police identity checks on the campuses and the harassment of undercover cops was reinforced with the introduction of turnstiles and security cameras to our school.

“In September 2019, the mail sent by BULGBTI+ to their club members was leaked to the public. In the following lynch campaign our friends charged with false claims, smeared, members subjected to hate speech and threats. The university administration not only left the students alone in the face of these attacks, but also initiated a disciplinary investigation against them. In this process, a petition was collected for the referral of Nesrin Özören, who made LGBTI+ phobic statements on social media, to the Ethics Committee, but the trusteeship rejected this petition without any justification, and Özören was made the head of the Molecular Biology and Genetics department.

“Similarly, ignoring the protests of Bimeks workers whose just struggle against labor exploitation were disregarded, the thief and fraudster Vedat Akgiray, who also signed Bulu's thesis that contains plagiarism, continued to teach Business Ethics and the trustee did not take any sanctions against him.

“And now, they want to complete what the 1st Trustee management could not by assigning Melih Bulu to our university. Our living spaces, including Hisarüstü and Boğaziçi University, have been under the police blockade for 20 days after the second trustee was appointed to our university in an anti-democratic manner on January 1st. 45 of our friends were detained in this process alone; our doors and walls were broken and our homes were raided because we were making noise against anti-democratic appointments; we have been declared terrorists and provocateurs. Those who could not stand seeing us as political subjects attacked us both in social media and mainstream media over our headscarves, LGBTI+ identities, and Armenian or Kurdish identities; we were shown as targets. Our friends Havin and Yıldız, who were detained, were subjected to hate speech, threats, discrimination and sexual violence because they were both Kurdish and LGBTI+. They tried to intimidate our struggle with strip-searches, harassment and threats of rape.

“Those who brought turnstiles to our school a few years ago now handcuffed the campus gates, waiting for us to show our students and identity cards to the police; as they occupied our living spaces with undercover cops wandering around the campus, and with their continuously recording cameras, verbal abuses, and their hateful gazes on us!

“Boğaziçi University is nt the only one that is being subordinated to trustees.  For months, trustee Verşan Kök rejected the demands of LGBTI+'s who are waging an organized struggle in METU to form a community by putting them in a bureaucratic loop and tried to prevent the METU Pride Parade in 2019 by using violence through the police forces that he allowed in the campus. He applauded as our friends were taken into custody with interventions in the campuses. Similarly, the trustee of Hacettepe University is still trying to stop the activities of the Queer Studies Club by using the ban decision of the Ankara Governorate, which was found unlawful by the courts. We continue to fight this dark mindset in all universities whit assigned trustees.

“We, as LGBTI+'s and women from Boğaziçi University, are aware of everything. We monitor the struggles in universities, especially in the Boğaziçi, and support the peoples whose wills have been usurped, the opposition press that has been muted, the workers and laborers struggling against labor exploitation. Those who besiege Hisarüstü, the Boğaziçi, academic freedoms, the media, local governments, and the will of the people will surely go away one day; we, as those who struggle tirelessly against all injustice, will stay here.

“Your phobias, your harassment, your threats will not daunt us. Because we are neither wrong nor alone! And we know: 'There is no salvation alone, either all together or none of us!'"

*Nakka means “no”, “never” in the LGBTI+ slang of Turkey