Protest march in Belgrade after a violent attack

A German participant of the conference ‘The future belongs to us. LGBT rights on the road to the European Union’ held in Belgrade on September 12-13 was attacked by hooligans. 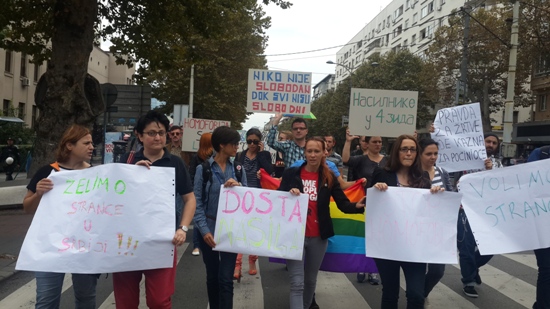 A German participant of the conference “The future belongs to us. LGBT rights on the road to the European Union” held in Belgrade on September 12-13 was attacked by hooligans. The participants made the following press release and condemned the attack:
A German friend and participant of our conference “The future belongs to us: LGBT rights on the road to the European Union” was attacked and seriously injured the night between the two conference days. The attack left him in life threatening condition.
The organizers Labris and Hirschfeld-Eddy Foundation along with co-organizers Civil Rights Defenders and YUCOM decided to change today’s conference programme to focus on moving forward after such an event.
We decided to organize a protest march in the streets of Belgrade at noon against intolerance, hate crime and violence against minorities, since the attack is speculated to have been xenophobic.
We call upon all human rights, anti-discrimination, civil society organizations, and all people of good will to build a strong alliance against hate crime, violence and any kind of minority related hostilities such as the attack witnessed in the early hours today. This incident echoes back to the unfortunate case of Brice Taton in 2009. Further, we ask that the Serbian state act against the perpetrators of this attack and to speak out against xenophobia, homophobia, and other prejudices that plague Serbian society. The rule of law cannot be sidelined when such things occur, especially from extremists such as nationalist and hooligans.
Today was violence against one group and tomorrow it will be to another, and so on. We all, whether LGBT, Roma, religious minority, disabled, or from other discriminated groups, experience the same violence, hate speech and hate crimes and we have to stand together to protect ourselves and to cooperate for a brighter future where all people can live as free and equal citizens. 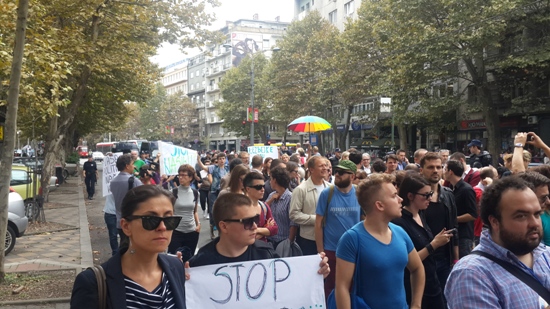 Every human being has to ask themselves in which society they want to live: In a society where some people have more rights than others or in a society where everyone has the same rights, the same chances and the same level of protection against violence?
The way a society deals with its minorities is a litmus test for its level of democracy, liberty and openness. We all have to be constantly cautious and attentive to make sure that the freedom, the rights and the liberties we have fought for are not attacked, taken away and replaced by intolerance, repression and violence.
Our thoughts and best wishes are with the victim of the attack, and we hope for his speedy recovery and well being.
The participants of the conference “The future belongs to us. LGBT rights on the road to the European Union”
Belgrade, 13 September 2014