Azerbaijan has been protested in three major cities of Turkey -Istanbul, Ankara and Izmir. 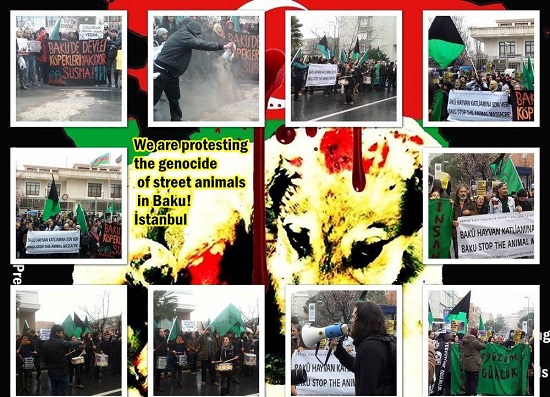 Azerbaijan has been protested in three major cities of Turkey -Istanbul, Ankara and Izmir- following the footage on international media that shows Azerbaijan authorities burn live dogs as a preperation for 2015 European Games. Activists urged Azerbaijan to stop the massacre right away.
Animal rights activists have staged a demonstration in front of Istanbul Azerbaijan Consulate to protest  mass destruction of stray animals in Azerbaijan for 2015 European Games. More than 100 people in Istanbul has marched to the Consulate with a banner reading “Baku is Burning Dogs” and spilled sacks of ashes in front of the Consulate to commemorate burned dogs. 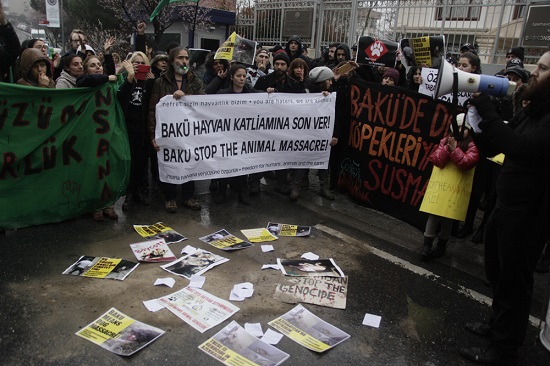 “Azerbaijan smells like blood”
Activists gathered in front of Akmerkez Shopping Mall in business district of Istanbul, Levent at 15th March and walked towards the Consulate. One-track of Zeytinoglu Road that leads to Istanbul Azerbaijan Consulate has been blocked by rallying people and the slogans chanted such as: “Baku means massacre”, “Azerbaijan smells like blood”, “Don’t stop shout, freedom is a right”. Turkish riot police has welcomed the crowd in front of the Consulate and informed them that they cannot rally in front of the Consulate. After a short quarrel, activists managed to proceed their demonstration in front of the Consulate.
Guray Tezcan who read the press statement reminded that animal massacre for 2015 European Games is not a single issue, but a part of ongoing effort in Azerbaijan to eradicate stray animals. Tezcan gave the example of another massacre in Azerbaijan that happened in 2012 for Eurovision Song Contest. Tezcan also said that “The idea to eradicate stray animals in the name of modern civilization is not just torturing animals but also Azerbaijani people who raise their voice for animals. Many people have been prosecuted and repressed because of peaceful demonstrations.” 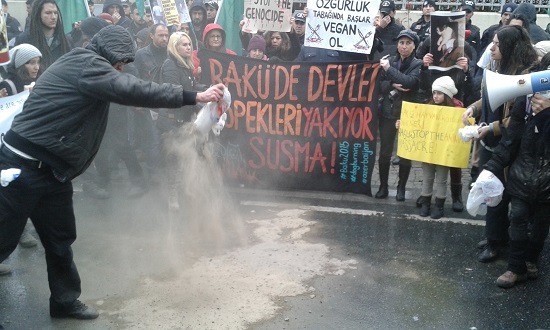