The Launch Event and Exhibition of the new Project "LGBTI+ in Freedom from Exploitation (LIFE) was held at Bandabulya Stage. 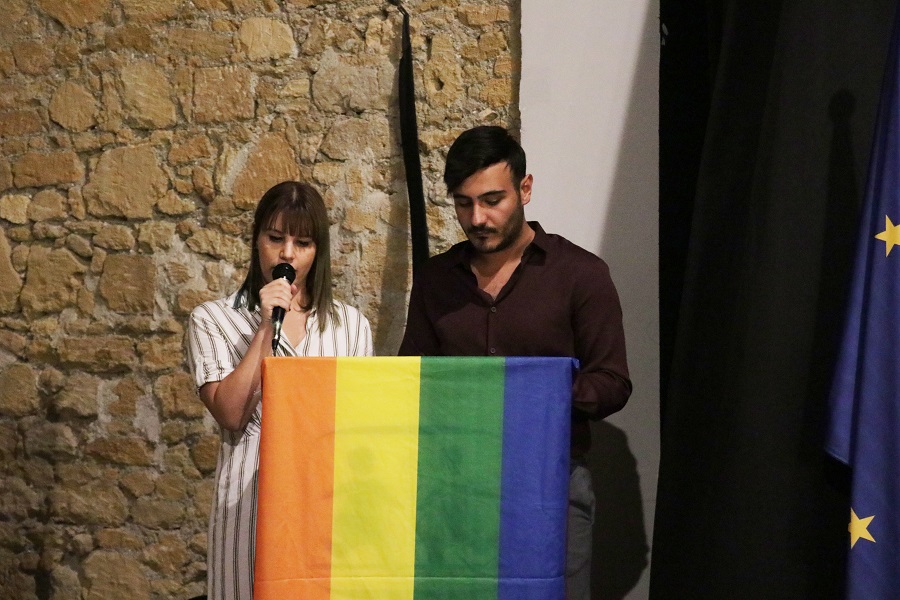 The Launch Event and Exhibition of the new Project "LGBTI+ in Freedom from Exploitation (LIFE)", which is funded by the European Union under the "Together Against Trafficking in Human Beings" Grant Scheme and implemented by Queer Cyprus Association in cooperation with Kaos GL, was held on 20 September 2019 at Bandabulya Stage.

The Life Project gave a start with the slogan "For Cyprus where Lesbian, gay, bisexual, trans, intersex and beyond (LGBTI+) will be free from exploitation". The "LGBTI+ in freedom from Exploitation (LIFE) Project" aims to contribute to the struggle of LGBTI+s who are trafficked in the northern part of Cyprus. The Project started in May 2019 and will last for two and a half years. The event started with the opening speech of the Project Coordinator of the Life Project, Doğukan Gümüşatam, and continued with the speech of Michael Docherty, head of section at the European Union Program Support Office in Nicosia.

Gümüşatam started his speech by thanking everyone who attended the Project launch and exhibition. He then provided information about the Project objectives and activities. He also explained the challenging struggle of the Queer Cyprus Association, which started as the "Initiative Against Homophobia", to make efforts to amend the local legal textwhich was criminalising anal intercourse and was practised against gay men. This was achieved on 27th of January 2014. Since then the Queer Cyprus association has kept working to combat discrimination based on gender, sexual orientation and gender identity. He concluded his speech by thanking everyone who helped in the project development.

Michael Docherty, head of section at the European Union Program Support Office, in Nicosia, started his speech by giving information about the objectives of the project. He stated that the grant projects selected under the Together Against Trafficking in Human Beings Grant Scheme complement each other, concentrating on vulnerable groups, on changing the legal framework and on providing support to victims. He further stressed that based on the latest U.S. Department of State Trafficking in Persons Report, the northern part of Cyprus continues to be a zone of impunity for human trafficking. Mr. Docherty underlined that “we all recognise that the fact that criminals traffic and exploit human beings for financial gain is a disgrace, which it is incumbent on all of us to stop”.

The opening event continued with a mini-visual and auditory exhibition, a work of Mehmet Kozan, curated by Derya Ulubatlı, and ended with a reception.