‘Queer Studies’ course of Ankara University’s Master Program of Women Studies has launched off yesterday with the play ‘Bundle of the Witch’ of stand-up artist Esmeray.

“Queer Studies” course of Ankara University’s Master Program of Women Studies has launched off yesterday with the play “Bundle of the Witch” of stand-up artist Esmeray. The show at Ahmet Taner Kışlalı Hall in Cebeci Campus was attended by 150 people.
Associate Professor Betül Yarar, who will run the course, said at the opening speech that the department is very excited to launch such a course, first of its kind in Turkey.
Academia Getting Together With Grassroots
Ali Erol from Kaos GL said that when they first published the Kaos GL Magazine, scholars at Ankara University Department of Sociology told them that a course on LGBT and queer studies is “not possible.”
Erol thanked Betül Yarar, Alev Özkazanç, Elçin Öz, the Master Program of Women Studies and the university administration for “taking the courage” to launch the course.
“Bundle of the Witch” Breaking the Gay-Straight Binary
Speaking about the opening play “Bundle of the Witch” Umut Güner from Kaos GL said:
“In many artworks on LGBT issues, perception of the audience may differ depending on whether they are straight or not. But “Bundle of the Witch” gives the same message for all. It shows that identities are relativistic and structured and it subverts them at the same time. Doing so, it shows the ways all these identities suffer and how “stupid” the oppressors are.” 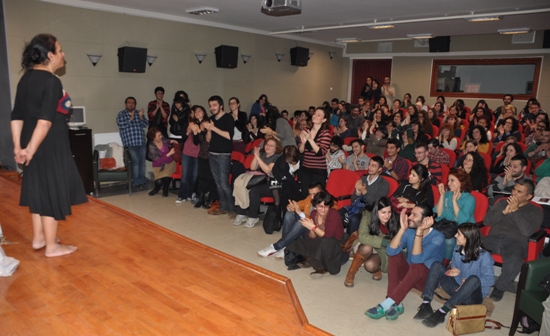 Next Week at Queer Studies Course
Queer Studies course will be given at Ankara University’s Cebeci Campus at the hall “ATAUM – 15” for anyone interested. The next class will be on 19 February 2013, Tuesday at 17.00 – 20.00. Teaching language of the course is Turkish.
In the next class Psychiatrist Dr. Koray Başar and Professor Dr. Selçuk Candansayar will give talks titled as “Development of Sexual Orientation and Gender Identity” and “Ideology of Psychiatry and Medicine, and Heterosexism” respectively.
Photos: Gülistan Aydoğdu / Kaos GL
Translation: Ömer Akpınar