During the ‘Religion and LGBTI Rights’ symposium organized in Berlin, LGBTI activists from South Africa, Israel and Turkey came together to discuss the situations of their countries. 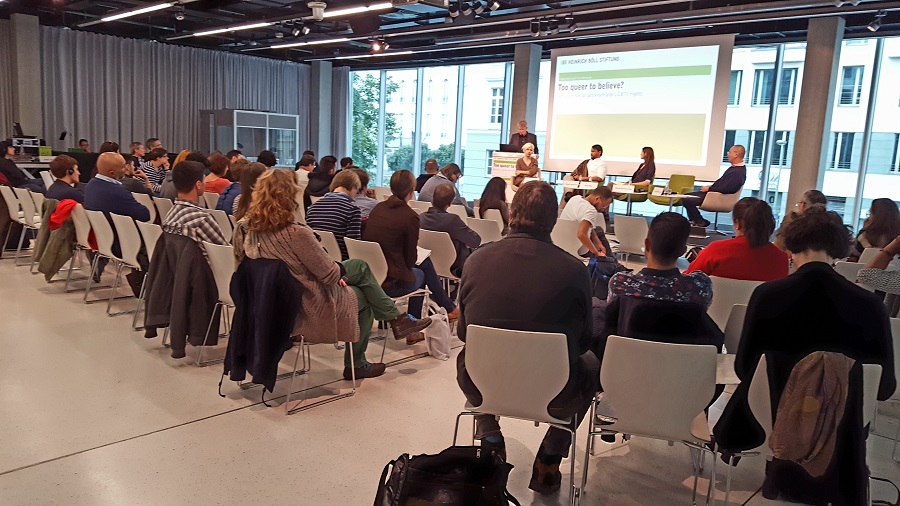 During the “Religion and LGBTI Rights” symposium organized in Berlin, LGBTI activists from South Africa, Israel and Turkey came together to discuss the situations of their countries. In the symposium where representatives of religious LGBTI organizations also gave speeches, sexuality and religious practices were discussed.

In the second session of the Religion and LGBTI Rights Symposium organized by Kaos GL and Heinrich Böll Stiftung, LGBTI and religious activists discussed the social transformation and current situation on this issue.

In this second session of the symposium where Koray Yılmaz Günay was facilitator/moderator, Imam Dr. Muhsin Hendricks from South Africa Inner Circle, Michael Brinkschröde, Sarah Weil from Bat-Kol and Aylime Aslı Demir from Kaos GL had a speech.

“As a religious queer, I live in lonely lands”

While indicating that he couldn’t work in church because of his sexual identity, he also stated that he had wanted to study on Christian homophobia in his PhD thesis but he couldn’t find any academician specialized on this topic.

Brinkshröde also said that although in 90s it was almost impossible to communicate with Catholic priests about LGBTI issues, now they have created a strong gay and lesbian network to join the synod. They also work for institutionalisation of the support system of LGBTI inclusion into the churches.

“Religion should be an ally for LGBTI movement”

From the religious lesbian organization Bat-Kol Sarah Weil gave a speech on the situation of LGBTI people in Israel. After she indicated that religion is still showed as the excuse of the violence and discrimination against LGBTI people, she said:

“Common ground of our identities require the dialog/connection among religions. Actually religion could be used for many important issues like universal human rights, justice for everyone etc. However, religion is growing and increasing its effects on negative way for us. Therefore, we could even lose the rights we have already had, unless religion would be an ally for the movement of equality of LGBTI people.”

Weil also mentioned her hard times and said: “Firstly you should change the people’s hearts.”

Muhsin Hendricks as the representative of Inner Circle from South Africa explained their works for marriage equality and indicated that among the MusliM organizations they are the first one accepting the queer marriages and advocating for it.

While talking about the increasing Islamophobia in the global sphere, he said that as a direct result Islamic conservatism also increases. He also stated that in South Africa religion is under the patriarchal hegemony, so homosexuality is still seen as a sin which needs to be punished with death.

At the end of his speech, he argued that Islam is such a religion open for reforms and he concluded: “Reforms were made in the past, so now only WE can change the patriarchal religious structure.”

“Our deaths and dying as the ‘other’ ”

As the last speaker Aylime Aslı Demir from Kaos GL firstly mentioned both  “Ölülerimiz, Biz // Öteki Olarak Ölmek” book and symposium while indicating that three ‘cursed’ groups as religious, sexual and ethnic were gathered there.

Demir also talked about the interventions to dead bodies and ‘stonewalled’ funeral rituals, and explained:

“Generally we know what to do after LGBTI individuals lost their lives, we actually get used to do it. However, our friend Doğa who lost her life during the transition process, so we couldn’t find a way after her family rejected her dead body...”

Demir also criticized the discourses such as “against humanity” and “civilization” because as she explained when such discourses are de-historicized the problem, they show it as the only one.”

LGBTI rights from the Islamic, Christian and Jewish perspectives