’For LGBTI people, government’s assurance is significant at gaining rights’’

International Conference on Gender, Diversity and Social Inclusion was started with opening speeches. High-ranking bureaucrats from all over the world took part. 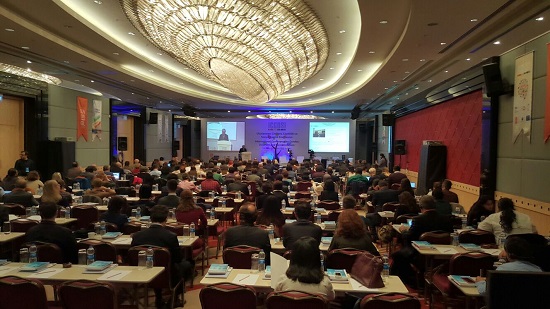 International Conference on Gender, Diversity and Social Inclusion was started with opening speeches. High-ranking bureaucrats from all over the world took part.

Kaos GL Association got together high-ranking bureaucrats from Turkey and all over the world, politicians and representatives of non-governmental organizations in Ankara at the International Conference on Gender, Diversity and Social Inclusion at Rixos Hotel to discuss policies of gender equality and comprehensiveness in terms of LGBTI rights. 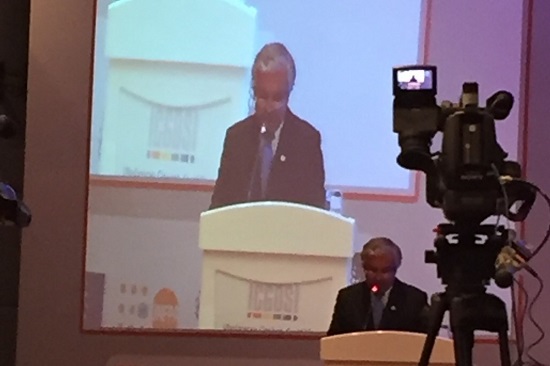 Kamal Malhotra as United Nations Resident Coordinator in Turkey, did the opening speech. Malhotra in his speech, emphasized that it’s not so hard for LGBTI people if we hold onto the principles of battle against the equality and anti-discrimination. Malhotra as he mentioned the importance the cooperation with government on this topic, he stated ‘’to gain equal rights, government’s commitment is important.’’ 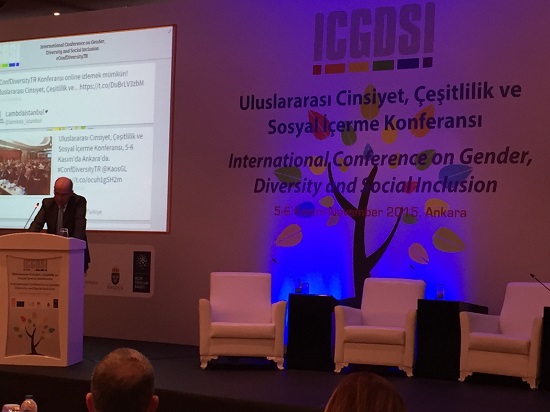 ‘’LGBTI people have to focus on themselves to make it real’’

At the opening, Karl Kulessa took the second turn as UNFPA Representative in Turkey. He said ‘’LGBTI identities is not a choice but a part of existence, no one has to explain or wait, not even a single gay, lesbian or transsexual individual has to explain anything, only have to focus on themselves to make it real.’’

Kulessa mentioned that living without interrogations is jammed to cultural norms therefore this road is a long one. He described the ones who express their sexual orientation freely, as brave people. 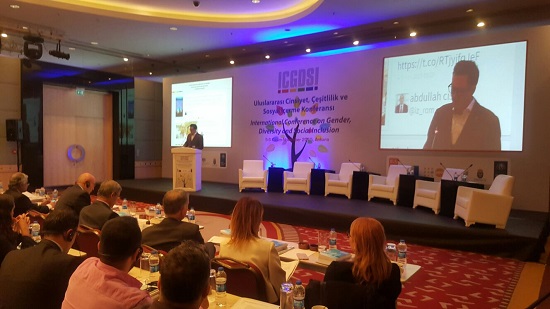 ‘’The places ruled by gay presidents have never been destroyed’’

Jonas Gunnarsson as General Rapporteur on the Rights of LGBT People, Council of Europe talked about the mechanism on social inclusion and discriminations imposed on LGBTI people in Turkey and all over the world. Gunnarsson added:

‘’Lots of people have witnessed homophobic actions against to transsexual and homosexual individuals in Ankara. Politicians characterize homosexuality as a disease, stigmatize them as descendants of Lot’s people who were damned because of their homosexual tendencies.

‘’This conference holds an importance as something to think on it and something to talk about afterwards. We need to determine what triggers the community against LGBTI people and we need to find things to turn it back. Stereotypes have been going around for years and people who go against the stereotypes being smothered.

‘’There have been places ruled by gay presidents but none of them have never been destroyed. Homosexual individuals are exposed to disproportional exploitation and discrimination. Generally first degree perpetrators are family members or close friends which means they are being attacked by people they trust.

‘’Transsexual people mostly have difficulty at job applications. Top media companies cause the rise of homophobic thoughts as they spread it.

‘’The rate of suicide, homelessness, poverty is so high and it’s keep going higher. There is no way for us to stay silent for them to be discriminated, marginalized. To avoid homophobic and transphobic expressions and murders, it’s required to establish an efficient petitioning and regulation. In constitution, gender equality must be indicated in a clear and comprehensible way along with freedom of organization, freedom of expression and intensive training for teachers to provide social inclusion.

‘’World has no luxury to leave some group of people behind as to pursue sustainable policy. It is a must to provide equal rights for LGBTI people, for everyone.’’ 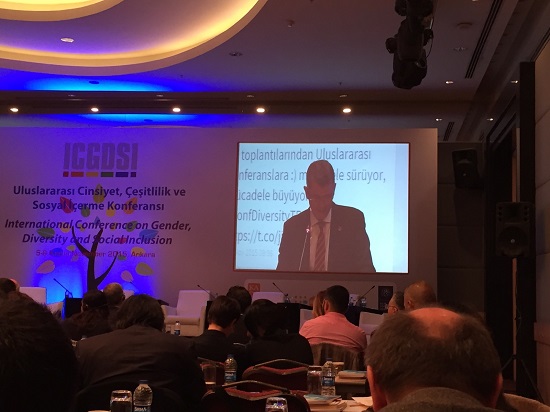 ‘’From death penalty to same-sex marriage’’

‘’All citizen no matter what sexual orientation and gender identity they carry, everyone can benefit from all social rights and protection. In United Kingdom, we achieved big success on LGBTI equality but that process was long and painful. Lots of injustices had been witnessed but we managed to reach a point from a country which punishes homosexuality with death penalty, to a country which legitimizes homosexuality with same-sex marriage.

‘’Attitudes in all levels of society must be changed for social inclusion. Kaos GL is one of the association we cooperate, which not only works on the approaches on identity but whole context of cultural relationship.’’ 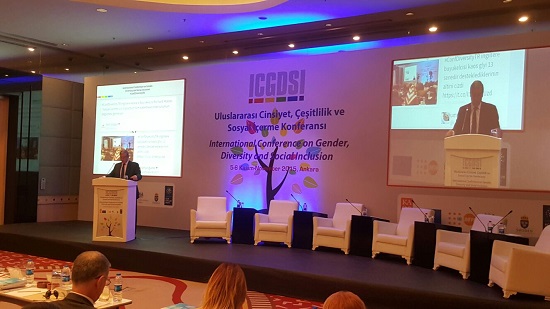 Deputy Head for the European Union Delegation to Turkey, Béla Szombati as in cooperation with Kaos GL, continued the speech:

‘’Non-governmental organizations play a significant role in order to fight with discrimination issue. The one and only reason why social inclusion hasn’t come true in world is because of stereotypes.  Civil rights and LGBTI rights are the issues which cannot be ignored by United Nations.

‘’The number of LGBTI associations have increased yet hate crimes, attacks and murders have continued in spite of all works. Therefore it is a must to enact a legislation which deals with discrimination.

‘’We are aware of the hardships LGBTI associations dealing with. The first activity I participated when I came to Turkey first time was organized by Kaos GL Association. Today I’m here again and I’m talking about LGBTI people’s rights and social inclusion, I see this is as an important line.

‘’Last Pride March was so significant. I had come to Istanbul as to represent The European Union and I ran into great numbers of difficulty. Those difficulties indicate the importance of this fight.’’ 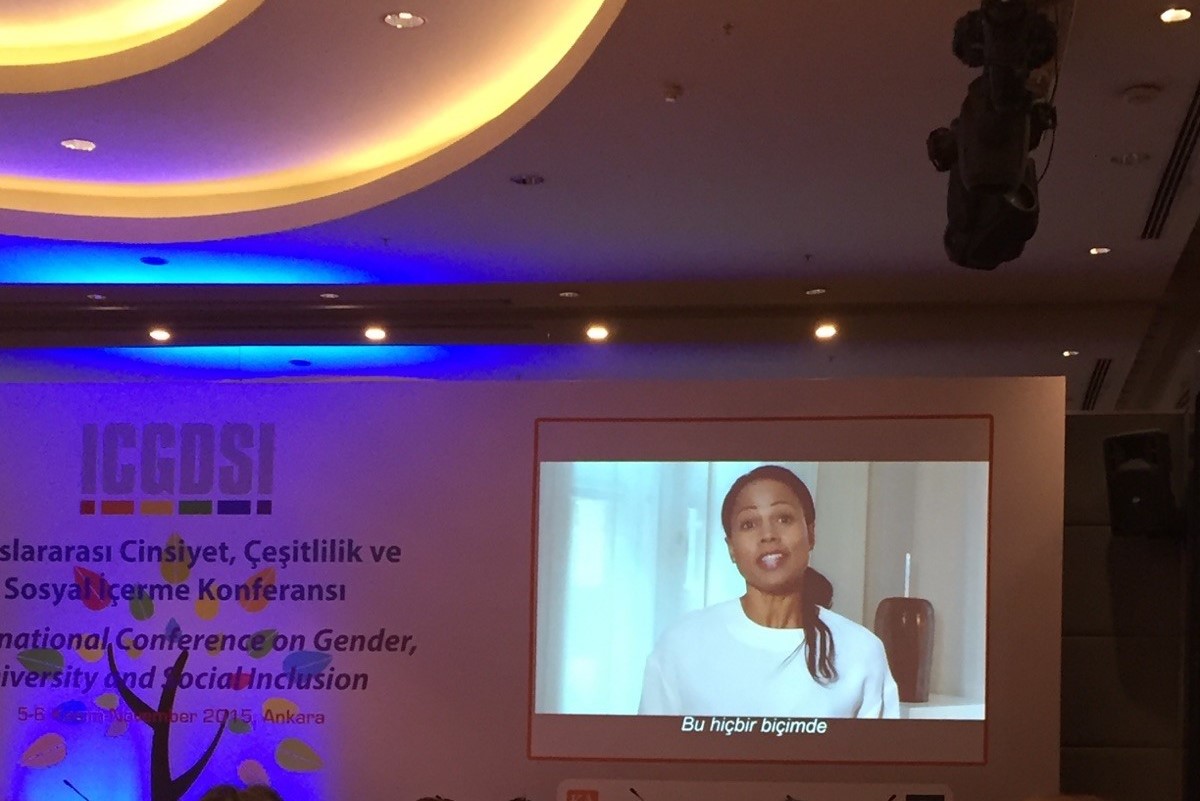 Swedish Minister for Culture and Democracy, Alice Bah Kuhnke joined the conference via video message at the end. Kuhnke analyzed the hate crimes and discrimination in Turkey and mentioned the cooperation between Kaos GL Association and Sweden.