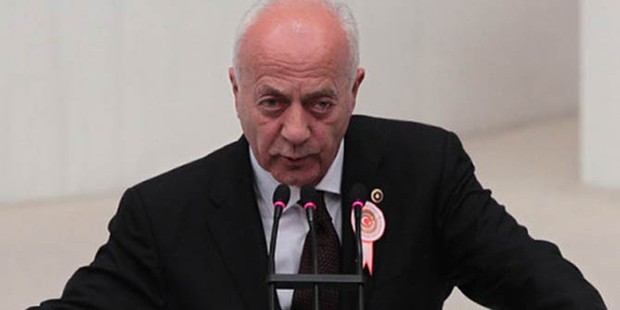 Pro-Kurdish Peoples’ Democratic Party’s (HDP) Women’s Coordination and LGBTI Coordination condemned the ruling Justice and Development Party (AKP) parliamentarian Ismet Ucma’s words, which include discrimination against women and LGBTIs, in a common statement.
The statement of People’s Democratic Party (HDP) is as follows:
The AKP Istanbul parliamentarian Ismet Ucma’s speech at the Turkish Parliament’s Investigation Commission of Violence against Women is trying openly to legitimize discrimination against women and LGBTIs and the violence resulting from this discrimination. We learned about this from the assembly protocol which appeared in the media.*
The AKP Istanbul parliamentarian Ismet Ucma had also recently stated that “the neighborhood must claim its honor in violence against women” and he said to women that “if you were physically strong enough you would beat up men more than they beat you.” Besides, Ismet Ucma described male violence as “temporary rage” and said he does not approve the suspension of men from their home when they are in temporary rage. Many women are being killed under the caption of “honor” in this country and such advice from Ucma for avoiding violence against women in real life is not only not universal but it is also shameful. The best thing that the member of “Investigation Commission of Violence against Women” can do is maybe to deprive women of his stroke of genius. We do not approve that men put in an appearance in this commission and make decisions instead of women.
Ismet Ucma’s words about LGBTIs which are written in the protocol include discrimination, as well. Ucma, while stating that they don’t have any statistical information about the LGBTIs who are exposed to violence, also stated that they wish that homosexuality in society and even in humanity wouldn’t exist and that it can be prevented by propaganda. Ucma describes the existence of LGBTI as an “adverse sexuality preference” and as danger. Please be reminded that homosexuality is not a choice but an orientation. Whether Uçma likes it or not LGBTIs will exist in every field of life. Beyond any doubt, what is “adverse” according to Ucma is described within the frame of public morality, honor, customs and the norms that are located around these “values”. And all of these mean violence, pressure and death for women and LGBTIs.
What is dangerous and must not become widespread is the heterosexist, sexist and conservative mentality that is so openly demonstrated by Ucma. It is the monist opinion which desires everyone to be like himself and doesn’t respect the sexual identity of people.
We, as the women and LGBTIs of HDP condemn the AKP Istanbul parliamentarian Ismet Ucma’s statement that openly includes discrimination against women and LGBTIs and we expect an immediate apology from him. This attitude that is so distant from the responsibilities of a parliamentarian who is a member of the “Investigation Commission of Violence against Women” makes us once again question how safe we are as women and LGBTIs.
Contrary to the world that Ucma imagines, we will persistently pursue our struggle for women and LGBTIs rights and freedoms in order for them to live equally and freely.
*Translator’s note: The relevant quote from Ismet Ucma:
We would not desire it but dear friends, we would wish that these things would not exist in our society, in humanity but we do not have any statistical information regarding events related to adverse sexuality preferences. It is this or that, it can be accepted or not accepted but it’s a fact of society. I find this important because: There are methods and means to prevent this, there can be suggestions for solutions that can be produced through our own codes different from the world. At least, its spread can be prevented if it does not come from society, meaning from birth and their human rights should also be protected. But we do not have any work or statistics on this. I think that at least, perhaps education or discourse can stop these facts of propaganda, reclamation, and promotion.
Translation: LGBTI News Turkey