NNHT demanded urgent action from the Prime Minister of RM, the Public Prosecutor and the Minister of Interior. 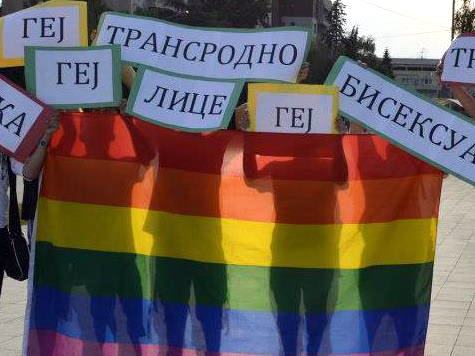 On 23th October at 9:30 p.m., a stampede of around thirty young people advanced with lightening speed from both sides of the street leading towards the Damar Coffee Bar, where the Skopje LGBTI Support Centre – Helsinki Committee for Human Rights was celebrating its second anniversary. Wearing hoods over their heads and armed with glass bottles and other hard objects, the thugs stoned the Coffee Bar and, as quickly as they had appeared, vanished in the nearby alleys.
At the time of the incident, more than sixty people were attending the celebration in the Damar Coffee Bar, two of which, a young man and a woman, were standing outside in front of the main entrance of the bar. They were attacked by the violent group with glass bottles and sustained injuries on their heads and bodies. During the attack, the assailants kept telling them that they should leave and that faggots were not welcome there. Several people who were inside the bar at the time of incident sustained small cuts from flying glass.
This the sixth attack on the LGBTI Center and its activities during the two years of its existence, of which three incidents of stoning (two during public events when guests were attending the building) and three attempts at setting the former offices of the Centre on fire. With the exception of the attack on the LGBTI Centre of 02.03.2013, which was a part of larger multi-ethnic protests, the investigation is still ongoing for the remaining cases.
The National Network against Homophobia and Transphobia (NNHT) of RM severely condemns the attack on the Damar Coffee Bar in the Old Skopje Bazaar during the celebration of the second anniversary of the opening of the LGBTI Support Centre.
NNHT demanded urgent action from the Prime Minister of RM, the Public Prosecutor and the Minister of Interior to address the violence against the LGBTI community and its supporters.
Therefore, NNHT demanded the following action from the Government of RM, the Ministry of Interior, the Public Prosecutors Office and the competent courts:
1.We demand public condemnation by the Prime Minister, the Minister of Interior and the Minister of Justice of the homophobic hate violence against LGBTI people in RM.
2.We demand quick resolution of the case, identification of the perpetrators and an efficient prosecution for violence, causing public danger, and racial and other discrimination caused by abusing organizations or individuals for their promotion of equality of all people.
3.We demand resolution, identification and prosecution of the perpetrators in the previous attacks on the LGBTI Centre in the Old Skopje Bazaar.
4.We demand opening a criminal investigation for the hate speech that followed on the social networks after the attack, as well as for inciting hatred, discord or intolerance on national, religious and other discriminatory ground against the media which published contents incorporating hate speech and calls for violence against LGBTI people during the time preceding the event.