According to Kaos GL's 2019 Media Monitoring Report, the number of newspapers targeting LGBTI+'s and their rights has increased. 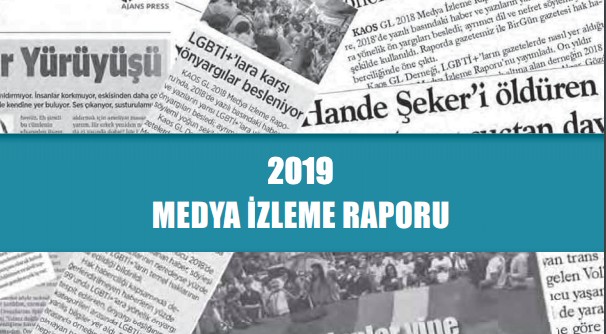 Kaos GL Association published its 2019 Media Monitoring Report on how LGBTI+s are featured in the newspapers. Ali Erol, Ali Özbaş, Aslı Alpar, Gözde Demirbilek, and Yıldız Tar conducted the research for the 2019 report of the association, which has been putting the representation of LGBTI+ in the media under the spotlight for 11 years. The report was written by Yıldız Tar, the association's Media and Communication Program Coordinator.

2675 texts which were published were examined in the scope of the research that studied the printed press with more than 20 variables. About 54 percent of these texts (1,452 texts) are published in national media; 46 percent (1,223 texts) were from local media outlets.

In 32 (1 percent) of the texts examined, LGBTI+'s were not the subject of the text, they were only included by names. When these news were published, LGBTI+'s took place in a total of 2643 news stories, interviews or columns from 2019.

44 percent (1150) of the texts were evaluated as part of the rights reporting. 1493 texts, which made up more than half (56 percent) of all texts, were found to be inconsistent with the principles of rights reporting. These texts found that either found as a violation of fundamental rights of LGBTI+'s, contained hate speech and/or discriminatory language, or that the texts fed prejudices about LGBTI+.

In 2018, these rates were almost as half, in 2019 there was an increase in both numerical and proportional terms in the number of content that violates the LGBTI+'s rights, propagates hate speech, includes discriminatory language, and based on prejudices.

In the vast majority (400 texts) of the 1,150 texts evaluated under rights journalism, it was revealed that ethical journalism was limited to respecting just the fundamental human rights of LGBTI+'s.

LGBTI+ organizations are not given the opportunity to speak

LGBTI+ organizations' views on LGBTI+ rights in 2019 in the written press only found a place in 55 texts. This is 5 percent of the news evaluated under rights reporting, while only 2 percent of all news. Close to half of the reviews of LGBTI+ organizations in the written press on LGBTI+ rights are the work of Kaos GL Association and statements made to the press by the association's representatives.

On the other hand, in 2019, in the majority of the news that subjected LGBTI+'s, experts and academics were consulted more than LGBTI+ persons or organizations. The vast majority of texts didn't include its sources, or the columnist only mentioned their own ideas.

Unlike 2018; in 2019, many texts violated the freedom of expression and organization of LGBTI+. In 2018, only 341 texts had this violation; but in 2019, 1077 texts found to be violating these freedoms. Systematically targeting LGBTI+ events, calling through the press to ban activities, legitimizing the activity bans can be seen as the reason for this increase. It has been observed that the printed press in many cities across the country has taken an approach that affirms the prohibition of Pride Week and Pride Marches and in this way violating the freedom of organization of LGBTI+.

Bisexuals and intersex are invisible in the media

In the vast majority of the 2,643 content produced over a year were generally included the statement of LGBTI or LGBTI+. The group that had the most room for them on the news was gays with 348 content.  The most invisible groups in the LGBTI+ community were bisexuals and intersex. There were only 8 texts in the media regarding intersex. Bisexuals were only included in 47 texts. For bisexuals in 2018, that number was 107. It has been observed that there has been a significant reduction in the representation of bisexuals in the media.