Third of solidarity matches with LGBTI refugees was done under the tutelage of Gay Referee, Halil İbrahim Dinçdağ. 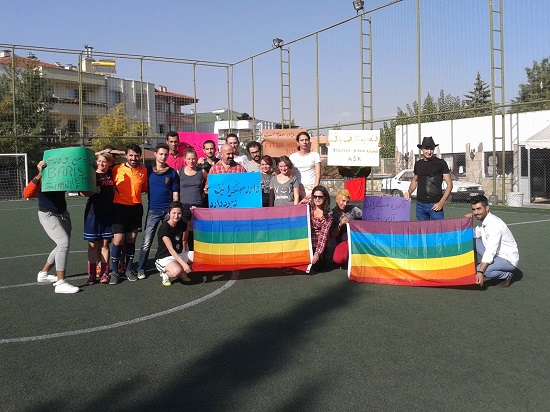 Third of solidarity matches with LGBTI refugees was done under the tutelage of Gay Referee, Halil İbrahim Dinçdağ.

The third of football match with refugees, organized by Kaos GL Association with the help of FARE (Football Against Racism in Europe) was carried out, with the intention of solidarity.

The friendly match between LGBTI refugees and local LGBTI people, under the tutelage of Referee Halil İbrahim Dinçdağ, ended in draw. (5-5)

Before the game, photos were shot just as banners in Turkish and Persian unfurled such as ‘’Peace Now’’, ‘’Football for Everyone’’, ‘’Up to Love between Two Women’’, ‘’Homosexual Football Referees Exist’’, ‘’Liberation of Homosexuals Will Also Free the Heterosexuals.’’ As to socialize, a feast was held.

The activity in the moderation of Lawyer Hayriye Kara, on behalf of Kaos GL Association, was performed in a great atmosphere with the participation of local LGBTI people, the union of Denizli LGBTI People and their families and representatives from ‘’One Fist’’ crew from Denizli Galatasaray FC.