The AKP’s hate politics has turned into a massacre call

Hate discourse against LGBTI reflected on street. A group, naming themselves as “Young Islamic Defense”, hashanged posters in Ankara streets, wanting LGBTI massacred.
At the outset, President Recep Tayyip Erdoğan then the AKP government and hate discourse directed by conservative media have started to be seen on the streets too.
Participants of the 13th LGBTI Pride March were exposed to police attack; thereupon, the AKP government announced the participants, about whom they talked proudly in their election posters, as ‘immoral’ and instigated hatred in media.
A group, naming themselves as “Young Islamic Defense”, has started to hang posters in Ankara streets stating, “If you see someone making duty of the people of Lut, kill both the perpetrator and the complement.”
Proposing that Muslim people should not silence about this issue; the group has defended massacre call on their website: “In the name of showing that Islam does not absolutely allow this situation, we have shared this hadith, mentioned also in Tirmizi and Ebu Davud, if you see someone making duty of the people of Lut, kill both the perpetrator and the complement!”
The AKP’s politics is reinforcing the hatred
In addition to the AKP representatives’ discriminative statements or hate discourses at different levels during its 12-year term in office, leading figures’ from the Justice and Development Party dangerous homophobic discourse during their parliamentary election campaign provoked hatred in a significant level. Homophobic and transphobic hate groups have received the message that has become prominent with the government’s attack on Pride Parade and has called for a massacre.
President Erdoğan declared just the elections “We don’t present a gay candidate” meaning HDP (People’s Democratic Party) Eskişehir MP Candidate Barış Sulu.
On the other hand, Prime Minister Ahmet Davutoğlu has created hate discourse upon Barış Sulu claiming homosexuals’ “being the reason of perishing the People of Lut” and asserted the party selecting MP candidate individuals with this feature can’t represent believing society.
Deputy of Prime Minister Yalçın Akdoğan, has made discriminative explanations by saying that “In the HDP declaration, Kurd for 8 and lesbians 9 times have been used. Is that a Turkish Society?”
Former minister of internal affairs, Efkan Ala meaning gay marriages in the HDP’s declaration had made the People of Lut arguments a current issue through his explanation of “This is like destruction of People of Lut.”
Attaching the HDP with its gay candidates, Yasin Aktay had said, “Muslim society’s approval of men to men marriage is not possible.”
Karaman: “Muslim people can’t defend a regime equaling homosexuals with pious people.”
Theologist Hayrettin Karaman, known to be close to the President Recep Tayyip Erdoğan, coming to the tore with his explanation of “Corruption and thievery are different things”, talked about the 23rd LGBTI Pride Week. “This country’s order might be secular, liberal democrat but no one should forget that the majority of our society is Muslim, accept homosexuality as immoral and so homosexuals can’t join into honorable and honest people, what they have done will be accepted as something shameful. People can’t defend a regime equaling homosexuals with believers.”
Lastly Bülent Arınç: “Unfortunately, I am ashamed to say this in a place where our lady sisters are present but some people turn this into honor.”
“But it is extremely saddening that they get completely naked in broad daylight, challenging and having fun in the middle of Istanbul, and unfortunately, parliamentarians from the CHP and HDP supporting them.”
.
“I submit this to our nation’s discretion. If our nation likes this and applauds it, it can continue to follow them. If our nation sees these as wrong, criticizes it, and beyond criticizing, says what comes to their mind, do the necessary thing at the ballot box.” 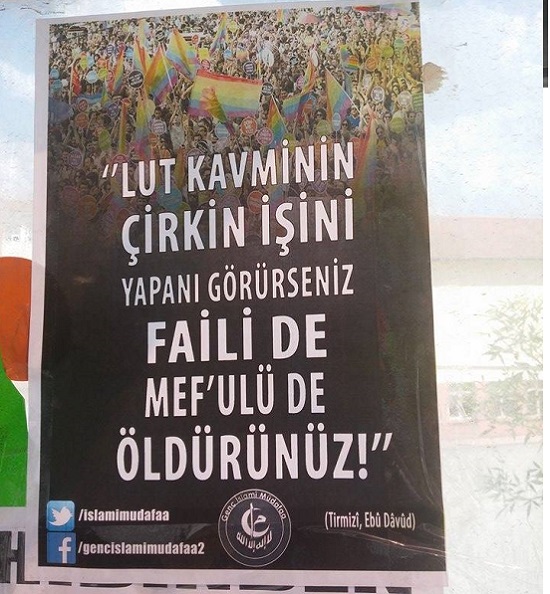 Who is showing whom as a target?
Young Islamic Defense group has made an explanation as the result of the complaints and reactions. In their explanation: “Right; the statement mentioned in the poster belongs to Hz. Muhammed. We have faith in this and not taking offence. LGBTs and the sympathizers, who have learned that the statement belongs to Hz. Muhammed, have insulted Hz. Muhammed and Islam religion openly with their messages and comments. On the other hand, left media groups launched hadith taking place on poster as our statement and aimed to show us as a target.”
Emphasizing that hadith is not group’s own statement, Young Islamic Defense group claimed to be shown as target and kept defending massacre call.
Complain flow on Facebook
Hate discourse and massacre call they made on Facebook have received complain flow. While seen that there is no accessibility to their earlier Facebook page, the group started to be seen with their new page on Facebook once more again.
They had shown Valentines Day and university festivals as a target
Group had stated Islam’s not complying with Valentines Day and university festivals before and reacted to festivals especially taking place in METU (Middle East Technical University). Group had used discriminative discourses about students attending festivals in their earlier statements.
Translated by Simge Şirin