The Congress Will Fight For LGBT 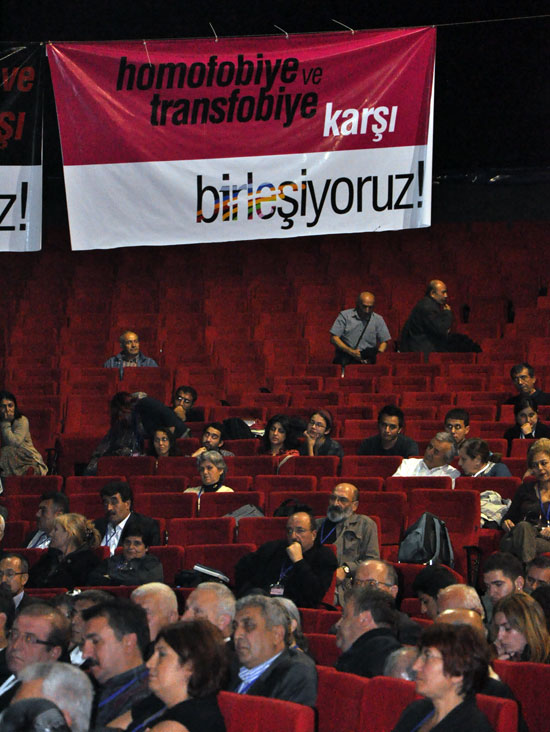 ‘The LGBT Motion for Resolution’ has been accepted in the Plenary Session of the Congress that also unites against homophobia and transphobia
The violence, exclusion, discrimination, discourses of hate and hate crimes that LGBT individuals are exposed to in public and social life take place in the fields that People’s Democratic Congress will fight off.
The Commission of The Issues of LGBT Individuals is included in the permanent commissions which are indicated to be established in the regulations of the Congress.
‘The LGBT Motion for Resolution’, which was issued by LGBT Organizing Committee, was tabled in the Plenary Session of the Congress that also unites against homophobia and transphobia on October 15-16 in Ankara.
Here we publish ‘The LGBT Motion for Resolution’ that was accepted.
Include ‘sexual orientation’ and ‘gender identity’ to the Constitution.
A regulation on equality will be made in the new Constitution. The Article on equality of the Constitution in effect is extremely shallow and unable to fulfill the needs. If the regulations on the Article are made as follows, it will be able to fulfill many needs and the most importantly the needs of all individuals and groups.
The Article should be titled ‘Equality and Anti-Discrimination’.
Everyone is equal before the law without paying regard to language, race, color, political view, philosophical belief, religion, creed, sexual orientation, gender identity, disability or similar reasons.
The phrase ‘Anti-Discrimination’ must be included in order to make the Article on equality effective. The equality of individuals before the law is only in appearance. Therefore, it is essential to prohibit discrimination and emphasize the importance of fighting against it in the Article. A reference should be made to Turkish Penal Code on the topic of anti-discrimination.
The Article on discrimination of the Turkish Penal Code in effect is also inadequate. The Article also needs to be broadened within the scope of the new regulations that will be done in the Constitution.
Include the concept of hate as a crime in Turkish Penal Code. Evaluate homophobia and transphobia in this context.
A reliable legal regulation on hate crimes can only be made on one condition which is to make a special law based on the definition of the OSCE. In Turkish Penal Code, it might be discussed to define the hate crimes and include the necessary articles in order to penalize the perpetrators of these crimes. Nevertheless, in order to make the legal regulations on hate crimes more effective, a special law titled ‘Prevention of Hate Crimes Law’ should be made. The definition, the acts that are considered as crime, major cases, penalty, compensation for losses of the victim/relatives, extension of this law retroactively and establishment of institutions to annihilate the reasons of hate crimes can be counted in the law text.
The definition of the OSCE:’ any criminal offence, including offences against persons or property, where the victim, premises, or target of the offence is selected because of a real or perceived connection, attachment, affiliation, support, or membership of a group which may be based upon a characteristic common to its members, such as real or perceived “race”, national or ethnic origin, language, color, religion, sex, age, mental or physical disability, sexual orientation, or other similar factor is a hate crime.
Homophobia and transphobia are everybody’s concern, can not be restricted only as a struggle for the rights of LGBT people.
Acknowledge sex work as a form of labor.
Just as domestic labor is an exploitation of patriarchal capitalism against women, sex work is hetero patriarchal capitalism’s exploitation of trans and non-trans women’s bodies.
While a struggle against trivialization of domestic labor is put up, secluding women is also questioned. These two issues correspond to a practical reality simultaneously.
Similarly, the assurance of sex workers must be provided while discourses against forced sex work are made. The main precondition of this is to acknowledge sex work as a form of labor.
The statements of homosexuality, bisexuality and transsexuality in the Recruiting Offices must be based on.
Any humiliating treatment cannot be excused in consequence of finding these statements inadequate. Photo or video image and the report of military hospital for psychological disorder must be evaluated in this context and these executions must be abandoned.
The exemption certificate from military service must be prepared in the manner of not causing problems in the one’s private/public life and employment.