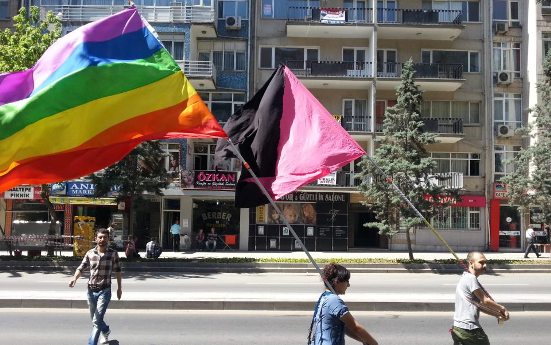 The Regional Network against Homophobia and Transphobia or baQlawa releases its second Memorandum in dedication to May 17, the International Day against Homophobia and Transphobia.
baQlawa, which consists of 18 different countries from the Balkans, the Middle East, North Africa and South Caucasus, puts emphasis on 5 different areas this year: legal changes, freedom of expression, health, education and employment.
MEMORANDUM 2014
by baQlawa
“Memorandum 2014” has been prepared in dedication to May 17, the International Day against Homophobia and Transphobia.
“baQlawa” (Regional Network against Homophobia and Transphobia (RN) / Middle East, South Caucasus and Balkan Countries LGBTIQ Network) was established in May 2011 with an aim to strengthen the communication and solidarity between LGBTIQ organizations.
Considering the fact that homophobia, transphobia and sexism are institutionalized by being wrapped up with militarism, nationalism, racism and religious conservatism in the region, baQlawa has a comprehensive approach tackling discrimination.
The network, which adopts a culture of non-violence and principles of transparency, equality, non-hierarchy, participation and solidarity, declares its second Annual Memorandum on how the year of 2013 looked concerning the LGBTIQ human rights in 18 countries.
This Memorandum is for highlighting the fact that LGBTIQ rights are human rights. It is important to remind that creating an environment in which each and every individual can access rights and freedom is the states’ responsibility.
On the one hand, LGBTIQs’ voice is being silenced and violence and intimidation against LGBTIQs have gained more visibility in different forms and dimensions throughout the world. On the other hand, their activities are being either banned or violated just because of the fact that they are talking about sexual orientation and gender identity and(or) organizing events or Pride March to defend their rights.
On the International Day against Homophobia and Transphobia (IDAHO-T), May 17, baQlawa calls on the states to stop violence and intimidation against LGBTIQs, take necessary steps to fight against homophobia and transphobia at both legal and societal levels.
Within the scope of “Memorandum 2014,” baQlawa would like to bring 5 different areas to the forefront, namely legal changes, freedom of expression, health, education and employment:
Legal changes
We demand the annulment of laws criminalizing LGBTI existence.
We demand regulations on hate crimes including sexual orientation and gender identity.
We demand LGBTI families to have equal protection as heterosexual families.
Freedom of expression
We demand punishment for homophobic and transphobic media coverage.
We demand professional and ethical media coverage of LGBTI-related topics.
Health
We demand trainings on sexual orientation and gender identity for health staff.
We demand anti-discrimination policy in the medical services to be in practice.
We demand the right of equal treatment for everyone.
We demand the costs of gender reassignment procedures to be covered by regular health care.
Education
We demand anti-bullying campaigns at schools and trainings on sexual orientation and gender identity for teachers.
We demand diversity education and proper inclusion of LGBTI topics in educational curricula.
We demand LGBTI events not be censored by university administrations
Employment
We demand Code of Employment to bring protection on the grounds of sexual orientation and gender identity.
We demand anti-discrimination policies in public and private sector.
We demand enforcement of workplace protections for all LGBTI persons.