"LGBTI+'s Freedom of Expression and Censorship Conference" continued with its final session: Censorship in the arts! 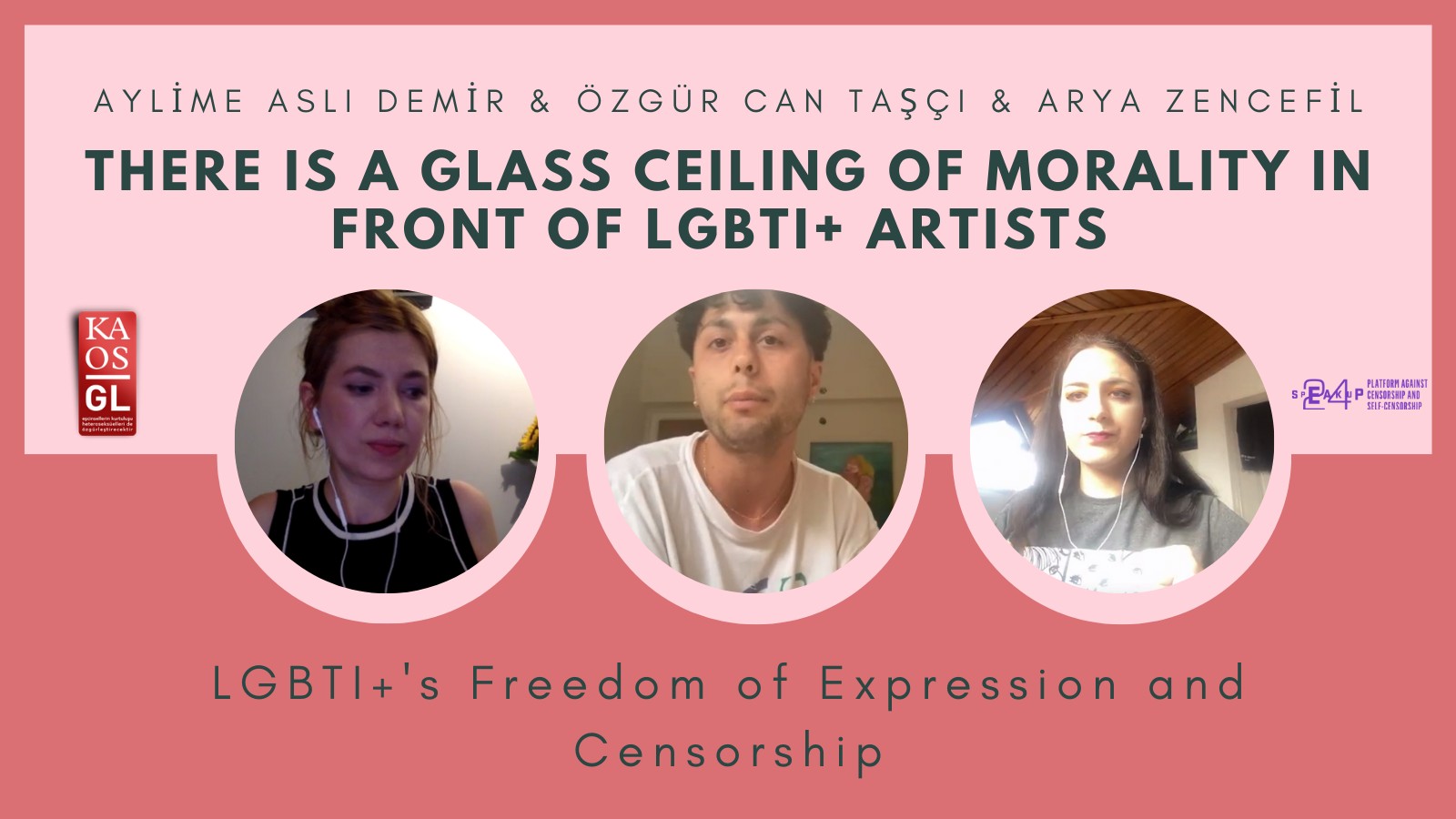 Freedom of expression and censorship in the arts were discussed in the last session of the conference. Aylime Aslı Demir of Ankara Queer Art Program, Özgür Can Taşçı of TAPA and Arya Zencefil of QueerFest Queer Artists Solidarity Network took part as speakers at the session moderated by Kültigin Kağan Akbulut.

The first speaker of the session was Aylime Aslı Demir with the speech titled "Art in Tough Times". Demir began her speech by talking about the similar processes that artists and LGBTI+'s go through in terms of vulnerability, along with the increasing inequalities in the pandemic. Demir then talked about the paths they drew in the light of the concerns that civil society has in its relationship with art and with the experiences from Kaos GL's "Future Queer" exhibitions in Istanbul at the end of 2015 and "Colony" exhibitions opened in Istanbul at the end of 2017. Demir explained the functioning of Ankara Queer Art Program and said that they had to move the planned workshops to digital platforms due to the pandemic conditions.

Ozgur Can Tasci took the floor with the speech titled "Multiplying the Areas of Freedom of Expression in Art Against Censorship?". Taşçıi started by talking about the need for TAPA experience.

"When TAPA started, there was a lack of space for queer artists other than queer exhibitions. My works were not exhibited in those galleries. I once heard: 'Queer artists self-censor themselves before us.' So why is this happening? Because we're under a blockade of state censorship. Artists are censoring themselves due to the possibility of censorship when preparing their portfolios."
After discussing the fields that the self-censorship applies, Taşçı ended their words mentioning the roadmap of TAPA: “TAPA Residence will be launched every 2 years, but we are preparing a program that will last about five months with twelve artists per month with the TAPA Workshop series.”

The last speaker of the session and event was Arya Zencefil from Pink Life Queerfest with her speech titled "Deprivation of Social Improvement". Zencefil talked about how the concept of "morality" affects visibility when it comes to representation and content diversity.

"We were seeing that only the representations close to the norms and moral lines of society could find a place in the mainstream. Queer personalities began to be seen as colorful personalities. I see a glass ceiling of morality in front of LGBTI+ artists."

Zencefil then went on to say that the guidelines of content platforms that make space for visibility and expression are barely better than nothing:

"I think the spaces that the art was created is important. I interpret the broadcasting rules set on social content platforms as 'better than nothing'. I think we'll see more stigma-breaking content in new media like TikTok and Twitch."

Referring to the need of the Queer Artist Solidarity Network, Zencefil shared that although QueerFest, which they desire to continue after the pandemic, continues physically, they are considering continuing the Network digitally accessible as a communication opportunity.