‘Trans-Feminist’, ‘Lesbian’ and ‘Masculinity’ are the titles of workshops in Feminist Forum which will be held at weekend (March 10-11) at Cebeci Campus, in Ankara. 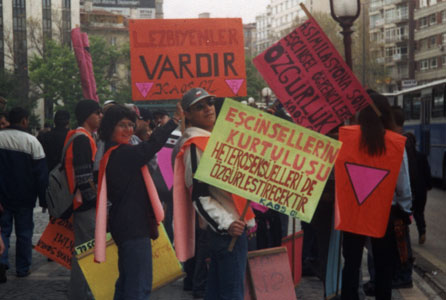 “Trans-Feminist”, “Lesbian” and “Masculinity” are the titles of workshops in Feminist Forum which will be held at weekend (March 10-11) at Cebeci Campus, in Ankara.
These workshops, as other activies, in International Feminist Forum coordinated by Kaos GL will be open to everyone as.
“Trans-Feminist Workshop” moderated by Buse Kılıçkaya from Pink Life Association is the last activity of first day and it will be held between the hours 17:00 and 18:30pm.
“Lesbian Workshop” will be held between the hours of 14:00 and 15:30pm on the second day of Feminist Forum and the workshop will be moderated by Zehra Tosun from Kaos GL Association.
The last activity on the second day of International Feminist Forum is “Masculinity Workshop” and it will be held from 16:00 pm to 17:30 pm. The moderator of the workshop is Remzi Altunpolat from Kaos GL Association.
All activies of International Feminist Forum will be realized on 10 and 11th OF MARCH,2012-SATURDAY and SUNDAY in Ahmet Taner Kışlalı Art House at Cebeci Campus at Ankara University.
SATURDAY, MARCH 10, 2012
TRANS-FEMINIST WORKSHOP-17:00-18:30pm
Moderator: Buse Kılıçkaya, Pink Life Association [Pembe Hayat Derneği]
How do feminisms see trans existence? Is transfeminism possible? Feminism or Queer Comradeliness? While discussing biological sex and gender, when it comes to trans individuals may we forget that gender is a construct? Is women solidarity a biological sisterhood of heterosexual, middle class, educated, white and turkish women? How can we proliferate our lifes through comradeliness?
SUNDAY, MARCH 11, 2012
LESBIAN WORKSHOP-14:00-15:30pm
Moderator: Zehra Tosun, Kaos GL Association
How is it possible that we evaluate gender issue not only through woman-man relationship but also through sexual orientation and gender identity? Through which pathes homosexual and bisexual women’s experiences go? How and where we confront with blind street? Why the problems of homosexual and bisexual womens are condemn to invisibility in the agenda of LGBT Movement? What is the place of the problems of homosexual and bisexual womens in feminist movement’s agenda? Is the state of being homosexual or bisexual woman known but is it unnamed? What happens when it is named? Or is it us who trivializes “the love women to women”? Beyond the discrimination based on sexual orientation and gender identity, how do we describe our problems as problems originating from the system? What does it mean that you are always counted as “something you are not”? What does society say, what do I feel? What do I encounter when I said I do not want to be in this construction? Is it possible to make a separation between sexual orientation and gender identity? What do we feel if we are individually visible or individually invisible and if we are socially visible or invisible? “What does it matter, becoming visible or invisible?” Yes, we want to discuss on where and what we experience or we do not…
WORKSHOP ON MASCULINITY- 16:00-17:30 pm
Moderator: Remzi Altunpolat, Kaos GL Association
The discussions on gender in Turkey generally go on women and the states of womanhood. However, to create a comprehensive framework it is necessary to address masculinity and states of masculinity which is dominant in the gender matrix. When we look at the cource of feminist researches in Turkey we see that masculinity was a neglected area. Nevertheless, particularly as a result of the moves of LGBT movement that is questioning heteropatriarchy and inviting the researchers to think about the existence of different masculinities, it has gradually become an issue on which talked about more.
From the day one it was established as a political subject, Kaos GL has been decisive on building a line focusing on the intersection points and common struggle practices between women and LGBTs which are the categories excluded, subordinated and subjugated by masculine system. 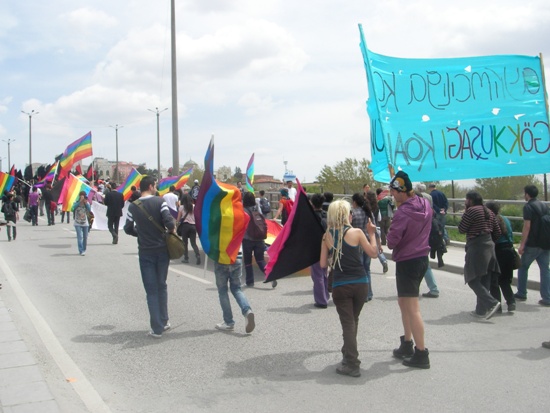 Therefore, Kaos GL determined masculinity as one of the themes of International Feminist Forum which will be held on 10-11th of March and it booked this session for this subject. We invite everyone who says “yes I have a problem with masculinity” to contribute to this session for creating cracks in the masculine structure surrounding us.