Doga Asi Cevik who said ‘Trans people are born twice; once from their mothers and once from themselves’ has passed away due to complications after her gender reassignment surgery. 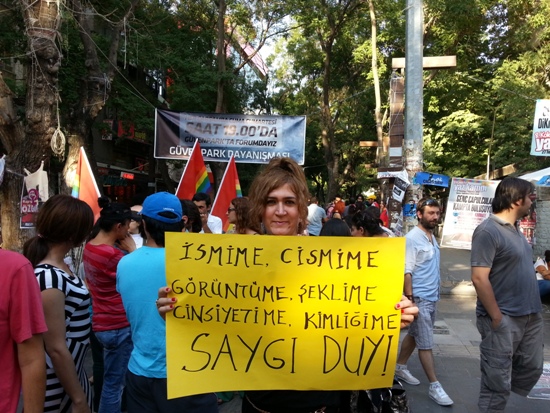 Doga Asi Cevik who said “Trans people are born twice; once from their mothers and once from themselves” has passed away due to complications after her gender reassignment surgery.
Cevik holding a banner which reads "Respect my name, my body, my look, my shape, my gender, my identity!"
Trans activist Doga Asi Cevik, who provided peer consultations at the Counselling Centre for Transgender People Association (T-Der) passed away on 20 January 2015 due to complications after her gender reassignment surgery.
It was stated that Cevik contracted an “unidentified hospital microbe” and had difficulties breathing due to problems in her lungs after her operation in Antalya.
Cevik had recently left T-Der to complete her gender reassignment process. Lawyer Sinem Hun will follow the legal process in case of neglect in her death.
“Trans people are born twice”
T-Der activist Deniz Eren Mutlu wished condolences to everyone during a statement on Cevik’s death:
“I won’t use too many words. Yes, Doga is no longer here. I can’t make sense of it. She used to say, ‘Trans people are born twice; once from their mothers and once from themselves’. But time did not let her be born twice. In her death, she got the body she wanted, that would complete her. This was the only thing that made her happy. This was her wish and she was very clear about that.”
Possibility of neglect will be investigated
Mutlu said Doga researched everything before going to Antalya for her surgery and said:
“She met with the doctor. She went to the hospital to see it. She knew that it would be the doctor’s first operation of this kind. Since last night many have been saying ‘was she ignorant, why would she go’ with good feeling but to this I want to respond that Doga was not ignorant, she was a very good researcher and was very informed about this. She had given peer consultations to many people. The case is now in the judiciary. Upon the request of her family, the prosecutor has started an investigation. The necessary legal support has been given. An investigation on whether there was neglect and if so, the reasons for it will be conducted.”
Mutlu said Doga would want a quiet and simple mourning period:
“I somewhat know Doga’s wishes based on our conversations on the deaths of others. She never liked ostentatious mourning and did not find them genuine. So let’s share our sadness in silence and mourn simply. I wish condolences to all her loved ones.”
Doga Asi Cevik’s words…
Doga Asi Cevik was an activist who worked on violations in trans women’s access to health and discrimination. Cevik shared her thoughts with kaosGL.org on many occasions and said:
“Trans women who have not had the gender reassignment surgery and who have the blue [male] ID card do not go to the hospital because they worry and fear that they will experience discrimination and ill-treatment. They wait to get better by using pills at home and resting.”
A recent interview with Cevik was also published in the “We can’t get enough of trans” book where she said:
“I see transphobia everywhere. Because there is something called transnormative. In the simplest way, if someone understands that I am trans from my voice and laughs, that’s transphobia. If it’s not your voice but something else, you experience discrimination. Your ID is blue and you experience discrimination. Its shape and place may change but there is discrimination everywhere. When you being trans is revealed without your will or when you reveal it yourself, discrimination starts.”
Cevik also talked about the organized struggle of trans people and said:
“I think attention needs to be given to trans problems. Isn’t this how we all organized? People first confront their own problems. That’s what I did. My transition has been very difficult so I work in this field. One sex worker friend works in the field of hate crimes because that’s what hurts her the most.”
T-Der will commemorate Cevik and her activism today at 6:30 pm at their office.
Translation: LGBTI News Turkey