Kaos GL Association’s suit against fundamentalist Turkish daily newspaper Yeni Akit for their articles containing hate speech against LGBTI people concludes with a decision of acquittal on the basis of ‘freedom of expression.’ 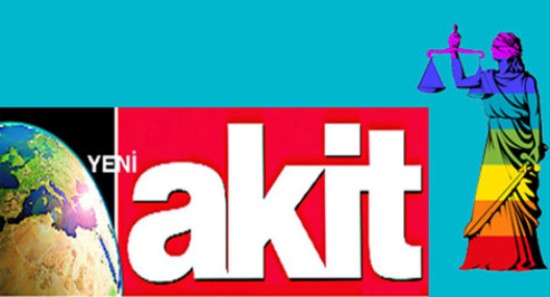 Kaos GL Association’s suit against fundamentalist Turkish daily newspaper Yeni Akit for their articles containing hate speech against LGBTI people concludes with a decision of acquittal on the basis of “freedom of expression.” Yeni Akit’s lawyer and general manager continued their homophobic attitude in court. The decision will be appealed.
The judge gave a decision of acquittal in Kaos GL Association’s case against Yeni Akit for articles that contain insult and hate towards LGBTI people and that point them as targets.
Kaos GL lawyer Hayriye Kara and lawyer Fırat Söyle attended the hearing in the Second Court of First Instance. Yeni Akit’s lawyer Ali Pacci and Yeni Akit general manager of publications Zekeriya Say attended the hearing. In the previous hearing, the court had decided that Zekeriya Say be brought into court by force.
“They should be punished for the crime of defamation”
Say repeated his petition for non-prosecution. The prosecutor argued that corporate bodies cannot be tried for insult. Kaos GL lawyer Kara, however, argued against the acquittal demand and reminded the court that they opened the case not on the crime of “insult” but the crime of “defamation.” She added:
“Based on European Court of Human Rights decisions, the concept of gender should be interpreted widely to also include sexual orientation and gender identity. Therefore, Yeni Akit has committed the crime of defamation against Kaos GL Association’s members and volunteers. We demand that the court’s decision be based on the Turkish Penal Code’s Article 216 that states the crime of defamation.”
They continued to defend their homophobic hate in court as well
Lawyer Fırat Söyle stated that they do not agree with the decision and that Yeni Akit persistently serviced news that defames LGBTI people. Söyle reminded international conventions on the issue. Yeni Akit’s lawyer Ali Pacci defended their publishing stance that contains homophobic hate by stating:
“My client’s concern is not homosexuality and its kinds but is against the normalization of this state. The term perversion is a term that is used to include all opinions that are not accepted by society. In the dictionary, it means standing in contrast to social values.”
“Homosexuality and its kinds are mental disorders”
Pacci stated that “homosexuality and its kinds are mental disorders” despite the fact that the World Health Organization and the American Psychiatric Association removed it from the category of “disorders.”
“It dynamites family values”
Pacci continued his hate speech through the concept of “family values” and said, “Attempts to normalize homosexuality and its kinds cannot be accepted. To show this as a healthy situation dynamites the family that is the foundation of society as stated in the constitution.”
Zekeriya Say chose to remain quiet throughout the hearing but towards the end, he stated, “They call me homophobic. They write articles calling me the homophobic manager. What crime, I did not commit a crime. People are making fun of me. I want my acquittal.”
Reminder on murders of women
The judge did not allow lawyer Hayriye Kara to speak, as she wanted to point to the problems in Pacci’s hate speech. Upon the reminder of hate crimes, Pacci said, “So we will not be able to say anything to women because of murders of women?”
The result of hate is acquittal!
The judge ruled that corporate bodies cannot commit insult and decided on acquittal by placing Yeni Akit’s homophobic publications within the freedom of expression. Kara stated that they would appeal the decision.
What happened?
Kaos GL made a criminal complaint against Yeni Akit through the Turkish Penal Code’s Article 216 “Provoking people to be rancorous and hostile and defamation” for Yeni Akit’s 23 October 2012 article “The Perverts are Infiltrating the Schools.” The Bakırköy Public Prosecutor’s Office deemed the article that calls homosexuals “perverts” as “freedom of press” and gave a decision of non-prosecution on 12 March 2013.
The decision was appealed and a case was opened on the basis of “defamation through print.” This case is the first public case in Turkey on hate speech against LGBTI people in the press.
Translation: LGBTI News Turkey