Turkish President Erdogan files a new lawsuit against Levent Piskin, an LGBTI activist, for a tweet Piskin had made and demands 50,000 TL (23,155 USD) in damages. 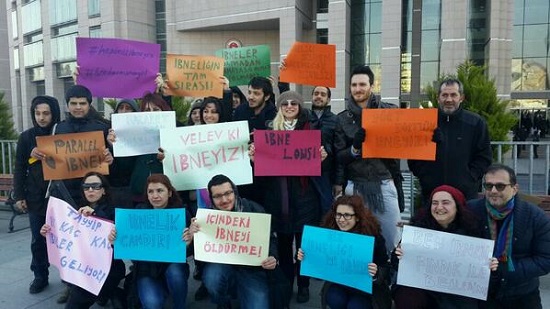 Turkish President Erdogan files a new lawsuit against Levent Piskin, an LGBTI activist, for a tweet Piskin had made and demands 50,000 TL (23,155 USD) in damages.
President Recep Tayyip Erdogan has filed a new lawsuit against LGBTI activist Levent Piskin for a tweet he had made and demanded damages worth 50,000 TL (23,155 USD). This is the second time Erdogan has filed a suit against an LGBTI activist over a tweet.
The verdict of the last case, in which Piskin was sentenced to pay 1,500 TL (695 USD) in damages was cited as evidence.
Press releases made in support of Piskin also targeted
The new case also targeted press statements made in support for Levent Piskin. In the filing, Erdogan’s lawyers wrote, “The whole incident was deliberately misrepresented. The defendant continues to cross the line and grossly insult the acting Prime Minister.”
In the notification document sent to Piskin, Erdogan’s lawyers argued that “Erdogan’s honor, dignity and reputation were damaged,” with the damage estimated at 50,000 TL.
“A fag* myself, I would never use the word ‘fag’ as an insult”
Piskin, in his previous comments to kaosGL.org, had stressed that ‘fag’ is a word that has been reclaimed by LGBTI people. LGBTI solidarity organizations had responded to the case by saying “the case against the use of the word ’fag’ has been filed against all of us. Homosexuality/Faggotry is not an insult, but a sexual orientation.”
What prompted the case?
Levent Pişkin had tweeted, “The next declaration I am expecting from Erdogan is, ‘I am a perfect fag. Obviously I will not learn how to be a fag from you.’ Kisses #LGBTIintheConstitution.*” Prime Minister Erdogan had then attacked Piskin through the media. Levent Piskin had, in turn, filed a criminal complaint against the Prime Minister for insulting his sexual orientation.
Presiding judge removed from the case
While Piskin’s complaint was not processed, Erdogan’s action had resulted in the sentencing of Piskin for libel (125/2) to two months and fifteen days of incarceration, later converted to a 1,500 TL fine.
The first judge appointed for the case had told Piskin at the first hearing, “Do not be afraid, we are the judges of the December 17th case.** Feel free to tell the truth.” The second hearing, originally scheduled for March 25, was postponed, the original judge removed from the case, and a new judge appointed.
*#AnayasadaLGBTI
**Referring to the corruption allegations raised against Recep Tayyip Erdogan, then the Prime Minister of Turkey, and circles close to him on and after 17 December 2013.
Translator’s Note:
*The Turkish term ibne is originally derived from the Arabic word “boy” and is widely used today as a derogatory slang for gay men. The Turkish Language Institute Dictionary defines ibne as “a passive homosexual man” and “a word said in anger.” The term is being reclaimed by many in the LGBTI movement in Turkey. In this sense, ibne’s current connotations lie somewhere between the American English terms “fag” and “queer.” In this translation “fag” is used to stand for ibne, and “faggotry” for ibnelik, the state of being an ibne.
Translation: LGBTI News Turkey