During the 7th Plenum of People’s Democratic Congress two LGBTI activists were elected to the administration consisting of 121 members in total. 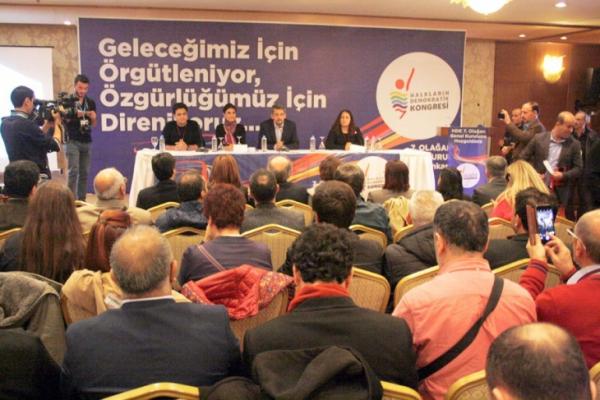 During the 7th Plenum of People’s Democratic Congress two LGBTI activists were elected to the General Assembly consisting of 121 members in total.

With the motto “We are organized for our future and resist for our freedom”, 7th People’s Democratic Congress' (HDK) Plenum was held in Ankara Plaza Hotel in November 13.

Onur Hamzaoğlu one of the suspended academicians from Kocaeli University and Gülistan Koçyiğit chosen in the previous general assembly were elected as HDK co-spokespersons.

The Peoples' Democratic Congress (Turkish: Halkların Demokratik Kongresi, HDK) is a union of numerous left-wing political movements, organisations and parties in Turkey that aims to fundamentally recreate Turkish politics and represent oppressed, exploited individuals who face ethnic, religious or gender discrimination. The Congress is anti-capitalist and was formed on 15 October 2011. It organises numerous conferences and holds official congresses. In 2012, the Congress established a new party that would act as its political wing, the Peoples' Democratic Party (HDP).