We Are Meeting Against Homophobia on May 17th!

Schedule of the Meeting (International Meeting Against Homophobia) has been organized by Kaos GL for 8 years on the occasion of May 17th was determined as the  International Day Against Homophobia.
This year, Kaos GL will discuss about “social peace” on May 17th, the day of protesting and struggling against all physical, ethical or symbolic violence related to gender identity or sexual orientation.
International Meeting Against Homophobia, held on May 17th week every year, will end with “Marching Against Homophobia” on May 19th.
17-18 May: Contemporary Arts Center (Cagdas Sanatlar Merkezi)
Main activities of 8th International Meeting Against Homophobia will be take place at Contemporary Arts Center in Ankara on May 17th and 18th.
On the first day of the Meeting, Kaos GL will discuss “peace process” with its argument “No one will really be free unless Kurdish people feel free and equal with their “Kurdish” beings”.
Forums and conferences to be held on 17-18 May within the scope of the Meeting will host the participation of Turkish, American, Dutch and French film directors, unionists, politicians and academicians.
LGBT Society is discussing peace!
First day of 8th International Meeting against Homophobia will start with “Peace Forums”.
“Peace Forum” will be organized between 1.00 p.m. and 3.00 p.m. with the participation of Idris Baluken, Democracy and Peace Party (BDP) Grand National Assembly Group Deputy Chairman; and Sezgin Tanrikulu, Republican People’s Party (CHP) General Vice President Responsible for Human Rights.
First session of the Peace Forum will be moderated by Alev Özkazanc from Ankara University Women’s Studies with the participation of unionists, academicians and women’s organizations.
Second session of the Peace Forum will be executed between 3.30 p.m. and 5.00 p.m. with moderation of Selcuk Candansayar from Gazi University.
Nilgun Toker Kilinc from Ege University, Inan Keser from Dicle University, Gulsah Seydaoglu from Cukurova University, Devrim Sezer from Izmir University of Economics and Ayse Devrim Basterzi from Mersin University will participate the Peace Forum. 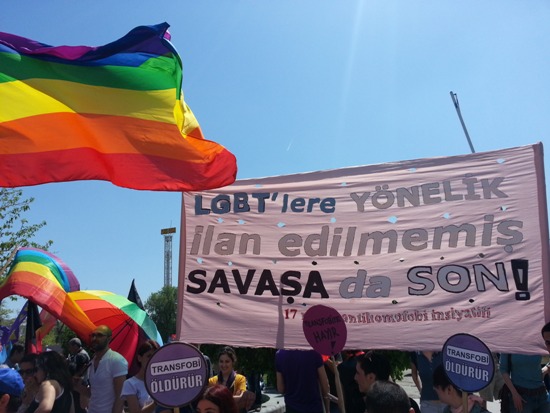 The first day of Meeting against Homophobia will end with “Freedom of Expression” panel
First day of 8th International Meeting against Homophobia (May 17th) will end with “Freedom of Expression Panel”. Panel will be executed with the cooperation of Kaos GL and Amnesty International Turkey Branch between 5.30 p.m. and 7.00 p.m.
Panel will be moderated by Murat Cekic, Director of Amnesty International Turkey Branch and Kerem Altinparmak from Ankara University Faculty of Political Science Human Rights Center and Attorney Veysel Ok will participate in the panel.

Interview with Lionel Soukaz and Film Presentation
The film “Ixe” of French director Lionel Soukaz will be presented and the session will be directed by Yekhan Pinarligil. After such presentation to be made in Contemporary Arts Center at 5.00 p.m., an interview will be made with the director Soukaz who has been involved to F.H.A.R. (Front Homosexual D’action Révolutionnaire) movement.
We are marching against homophobia on May 19th!
International Meeting Against Homophobia concludes with the “Parade” since 2008. This year, “Marching Against Homophobia and Transphobia” will be made on May 19th.
Parade to be made under the rainbow flag against homophobia and transphobia for a world in which LGBT’s and heterosexuals will liberalize together will start at Kurtulus Park at 2.00 p.m. and it will end with the press statement to be made on Sakarya Square.