We March for Love and Freedom from May 1st to May 17th!

We wave our rainbow flags again, against homophobia, trans-phobia, hatred and against exploitation. We are on the streets again on May 1st, at the feast of freedom! 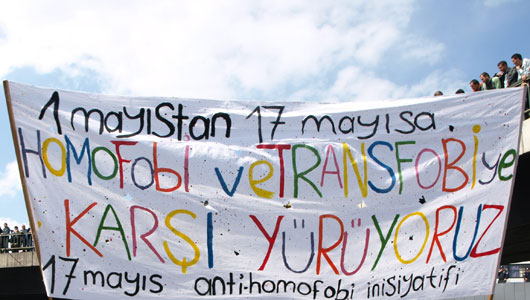 We wave our rainbow flags again, against homophobia, trans-phobia, hatred and against exploitation. We are on the streets again on May 1st, at the feast of freedom!
As being the last prisoners of Anatolia (Turkey!), we lesbian, gay, bisexual and trans (LGBT) individuals try to remove the heterosexist blockade surrounding our beings for the last 12 years.
Although current system ignores and presses our sexual orientations and gender identities imposing compulsory heterosexuality, we as LGBT individuals come from every area of life. We say "No to ones who deny our existence and who repel us from social and political lives!". We want legal security allowing us to participate every area of social and political lives as equals.
We insist on recognition of the "sexual orientation and gender identity" reality which defines LGBT beings! We, as LGBT individuals, won’t surrender to those denier politicians who try to refer our lives to "other" or "et cetera" invisibilities.
We Build Bridges between Freedom Fights from May 1st to May 17th!
May 1st is a significant milestone with regard to LGBT fight in Turkey. We appeared in public sphere on May 1st, 2001 by joining the celebrations and we pointed out the commonality of labor fight and LGBT fight with our flags and our slogans.
Meeting Against Homophobia also develops as a part of freedom fight. Kaos GL, acting with "Freedom fight is common, so should the fight be common" motto, builds bridges between freedom fights in the period between May 1st and May 17th defined as International Day Against Homophobia.
We aim to combine fights against attacks and discriminations LGBT individuals are exposed to and widen the fighting areas through these bridges.
We won’t Surrender to Heterosexism! Equality or Nothing!
Following May 1st, "Parade Against Homophobia and Trans-phobia" will be done in Ankara on May 20th 2012, Sunday.
At the end of International Meeting against Homophobia, we will march against homophobia, trans-phobia and against hatred to stand out against homophobia and trans-phobia.
We will march from Kurtulus to Kizilay (city centre) under the rainbow flag with "We won’t Surrender to Heterosexism! Equality or Nothing!" motto!
We will march against hypocrite morals of heterosexist system which restrains all LGBT individuals behind a lie wall with their judgments and insults, which makes LGBT individuals’ lives miserable by exposing them to compulsory heterosexuality, which slaughters LGBT individuals in metropolises...
We will march for the fight against heterosexist colonial system which tries to assimilate us by eliminating all ethnic, cultural and sexual differences thus which tries to kill us...
We will march against the hidden and undeclared war of heterosexist system aimed at LGBT individuals...
Liberation of LGBT individuals will liberate heterosexuals too!
There is a place for everyone under the rainbow flag! May we march all together to get stronger together and to liberate together!
Kaos GL
May 1st 2012, Tuesday, Ankara
Meeting Place and Time: In front of train station, at 11:00 a.m.