"The crime is not the rainbow flag, it's the police blocking the flags"

We have talked with activists about the police attacks against rainbow and trans flags in Adana, Ankara, Antalya, Diyarbakir, Istanbul: They are playing snatch the flag! 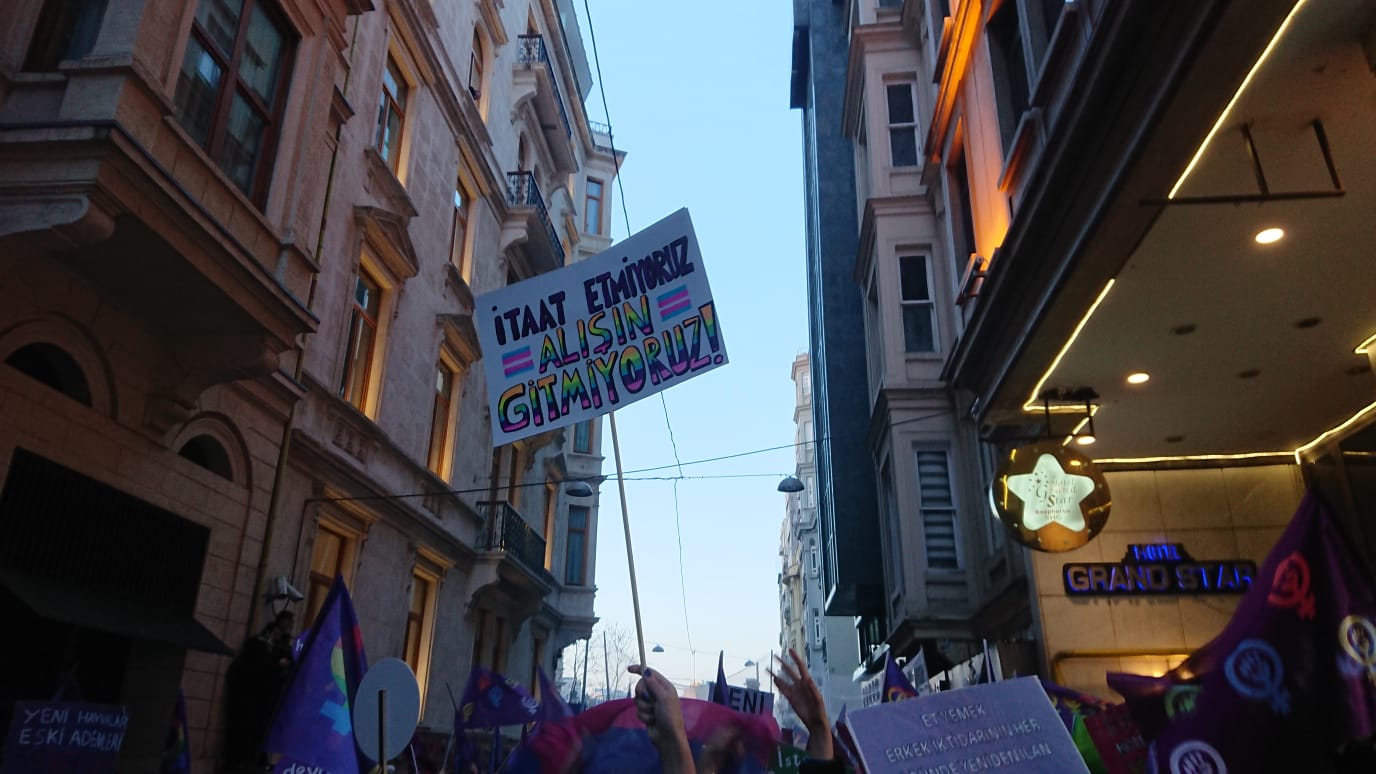 “On March 20th, I smuggled 5-6 flags to a protest in Ankara. There was no problem getting in, but after cops saw me handing out the flags, they started coming at me as they saw me alone. I heard them say, "They got a flag, take it." Someone grabbed my arm, but I was able to escape at the last moment. They literally attacked all the flags that were distributed to the protesters. They attacked only those holding flags. They tried to pull the flags out of people's hands, they recorded videos of people with flags. It all turned into a snatch the flag game. An activist who took back the flag from the hands of the police threw the flag to the air, another one picked it up and threw it again, and in the process, the police literally chased after the flag.”

These words belong to Bilge, an activist who participated in the Istanbul Convention protest in Ankara on March 20th. Bilge says the police were playing "snatch the flag" to prevent rainbow flags during the protest.

Recently, police in almost every city has been attacking symbols of the LGBTI+ movement, rainbows and trans flags. They say "it's illegal, and cannot be allowed".

The lawyers and LGBTI+ activists we interviewed say that these bans are neither legal nor legitimate, but are the result of the Government's anti-LGBTI+ policies.

“An unofficial but de facto ban”

Att. Kerem Dikmen of Kaos GL says, "There is an unofficial but de facto ban that became more visible  during the protests at the Boğaziçi University and subsequent ones against the withdrawal from the Istanbul Convention." Dikmen also stressed that there can be no legal and legitimate basis for this ban:

Carrying a rainbow flag is not a crime and not prohibited, but police are blocking flags in protests. So many people responded to a small post on social media while preparing this article... Some said police took their flag during the march, some said they were subjected to violence, and some said they had to do incredible things to enter the protests with flags.

Atakan describes the ‘snatch the flag’ at the Istanbul Convention protest in Ankara on March 20:

"We were a few people holding LGBTIQ+ flags and rainbow banners. Just before entering the are, I noticed the police pointing their fingers at us. Then I hid the flag in my coat. They tried to pick up our friend who was handing out flags to people, as we were entering the area. My friend dropped the flag and came to us, and they didn't let a rainbow banner in. Flags were then raised in the protest area. Ten minutes later, a friend of ours from Unikuir was attacked by the police for raising a flag. The police unsuccessfully tried to take the flag, but after 10 or 15 minutes, three police came back and attacked and took the flag. As I realized they were walking in front of me, I took the flag away from and threw it to Özgür, we didn't give the flag away. Then a friend of ours raised that flag until the protest was over. After the protest, the police who tried to take the flag threatened our friend and said, 'Did you think I wouldn't recognize you, do you think you're smart, it's easy to pull an act in the crowd.”

Police did not allow LGBTI+ banners, trans and rainbow flags and umbrellas throughout on March 6th, at the "Great Women's Meeting" held in Kadikoy, Istanbul, attacked the Trans+ parade, which was formed with the call of the Peoples' Democratic Congress (HDK) LGBTI+ Assembly, had the microphone turned off after the speeches of activists at the podium, and after the protest, they followed trans women and detained them by taking them out of the taxi they were riding in, and detained those who reacted to their violence. Detained activists stressed that they were subjected to torture and ill-treatment.

Police attacks on the rainbow and trans flags in Istanbul were not limited to this protest. In fact, there were chain arrests in the Boğaziçi University last week that would be the subject of tongue-twisting rhymes:

Çiçek Tahaoğlu, a journalist who participated in the Istanbul Convention protest in Kadikoy, Istanbul on March 20th, says the police were looking for "something about homosexuality":

"I was entering the field not as a journalist, but as an activist. One of the female police officers pulled the purple flag from my hand at the search point. She showed it to her chief and asked, 'Shall we confiscate this?' They searched us. I asked them exactly what they were looking for. "The thing, uh... what was that something about homosexuality" they said. I didn't have a rainbow on me, so they let me through."

In Istanbul, police raids on flags and banners began to happen in almost every protest. So much so that feminist lawyers had to make a call to identify what happened in Kadıköy on March 27th.

Flags didn’t cut it, now it came to the scarves

"At first 'We certainly don't allow it' they said. When we were negotiating, we thought they wouldn't allow the flag. But it turns out they were talking about the scarves in the bag. They tried to confiscate the scarf in our friend's purse. We invited them to reason, asked them how will they confiscate the clothes on us. Our socks were rainbows too, we showed them. After that, they left, but this time they approached our friend who wears a rainbow scarf from behind and tried to take the scarf. They let us go upon our objection."

Police also threatened to attack because of a rainbow flag that was raised during a press release for International Women's Day on March 8, outside the Diyarbakir Bar Association Women's Rights Center's building. Despite the police threat, the flag was not removed until the end of the press release.

The police is fabricating new "crime"s

Antalya was one of the cities where police attacked because of rainbow flags. An LGBTI+ activist we interviewed, who did not want to be named, said that a woman was beaten by police and the LGBTI+ flag was confiscated during the Istanbul Convention protest in Antalya on March 20th. When lawyers asked police over which legislation were they confiscating the flag, which was referred to as a "criminal element," the police replied, "I'm not negotiating with you here. We're not going to give the flag back." Then the flag was taken back.

Adana Women's Platform lists the materials that were not included in the March 8 rally in Adana as follows:

*We are rebelling against patriarchy. We are on the streets for our freedom' banner was not allowed on the grounds that there was a small rainbow picture on the side.

*'We do not obey the rector, the boss, the husband' placard

*'We will not hush down, we're not afraid, we're not looking down' placard

Att. Dikmen emphasizes that the situation today is a continuation of what has happened in recent years. Dikmen states that it is closely related to the intervention of the Ministry of National Education in rainbow drawings and the LGBTI+ censorship of the Ministry of Commerce. Activists say the attacks go hand in hand with public hate campaigns. The Kaos GL Association's March 5 statement on its reform action plan states that LGBTI+ people face violations in all areas:

“The police plays snatch the flag, we raise the rainbow everywhere”

"I felt the need to hide my flag on the way to protest and I wrapped in my hat and then put it in my bag. As a Boğaziçi student, I felt such need as my friends were investigated and detained over the rainbow flag. When I was in the field of protest, I saw a group in front of me take off their flags from their stashes like me."

Atakan from Ankara says these practices create concerns about being targeted.

Despite all this oppression, rainbows and trans flags fly high in protests, and activists are inventing new ways to get flags into the protests. "The police plays snatch the flag, we raise the rainbow all over Ankara," says an activist we interviewed from Ankara...