Human Rights Of Lgbti+ People In Turkey Report: There is an increase in violations caused by public authorities! 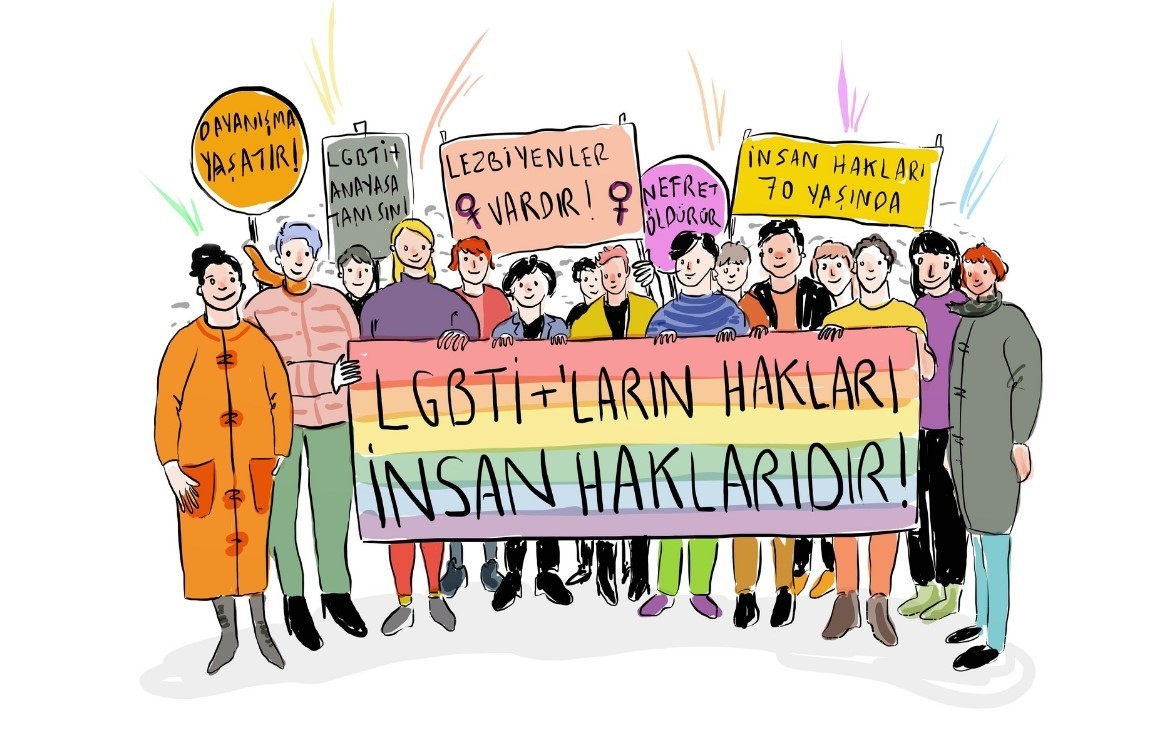 Kaos GL Association has published the Human Rights Of LGBTI+ People In Turkey 2019 Report. In the report prepared by Att. Yasemin Öz; There are cases of practices and human rights violations from Turkey that prevent LGBTI+’s from access to human rights.

The association shared the Turkish version of the report with the public through an online press conference held on May 17, International Day against Homophobia, Biphobia, and Transphobia. On May 17, once again the shout “LGBTI + rights are human rights!” and a call for solidarity was made in the meeting attended by Murat Köylü, Human Rights Program Coordinator of the Association, Att. Yasemin Öz who prepared the report, Law Coordinator Att. Kerem Dikmen and Refugee Rights Program Coordinator Att. Hayriye Kara.

“May 17, 1990, is one of the most important thresholds in the development of humanitarianism”

Murat Köylü opened the meeting and explained the importance of 17 May and the struggle for human rights with the following words:

“As Kaos GL, there is a reason for us to share our annual human rights report with you and the public today. May 17, 1990, is the day in which one of the most important achievements of human rights thought and struggle for equality is experienced. In this sense, it is brought to the agenda every year by the global LGBTI+ movement, the architect of this achievement. 30 years ago, the World Health Organization turned away from an ideological error based on the majority hegemony, which had no scientific basis, and removed homosexuality from the category of illnesses. In the meantime, it is worth remembering on the occasion today: The World Health Organization decided on May 29 of last year that transsexual existence will not be seen as a disease anymore. This change shows us that homophobic and transphobic discriminatory ideology can be defeated even in the field of medicine where it is the most institutionalized. In fact, "seeing it as a disease" was just an excuse for supremacist heterosexism that legitimizes and promotes rights violations against LGBTI+ people. One of the most important reasons why May 17 is a human rights day, is that it's shedding light on the concept of "equal human dignity" that resists such supremacist attitudes. Universal human rights values ​​tell us this: Any majoritarian or customary viewpoint, attitude, tradition, including the dominant interpretation of medicine, is invalid when it comes to "protecting human dignity" and ensuring the principle of equality. And any discriminatory policy, including pathology in medicine, will face demands of rights and equality.

“May 17 is a global celebration day in which one of such demands for rights and equality is won. In this respect, we wish that the Rights Of LGBTI+ People In Turkey 2019 Report, which we will share a little later, reflect the positive developments. But unfortunately, we can not say that the national legislation and policies in Turkey is in an advanced state in the context of the protection of human dignity. On the contrary, according to the Rainbow Index of ILGA Europe, Turkey is one of the worst two countries with Azerbaijan. The things to do are obvious: clearing the legislation, case law, and public policies from discriminatory elements against LGBTI + people. Bringing legal and political measures to the agenda against the policies and hate speech that attacks LGBTI+ people's equal human dignity and universal human rights. And enforcing laws and policies that protect and support equality. Many examples can be given... Anti-discriminatory article of the Constitution, Articles 122 and 216 of the Turkish Penal Code. Labour Law. Human Rights and Equality Institution and Ombudsman Law. Policies that respond to the needs of LGBTI + people such as employment, health, education, and social services. We demand from the State of Turkey to make these regulations as soon as possible in accordance with its international human rights obligations. Only in this way we can resist reckless human rights violations similar to those we included in the report that we will now share, and establish justice. Only in this way, we will fulfill the responsibility of reason, conscience, and human dignity.”

“There is an increase in violations caused by public authorities”

After Köylü,  Att. Yasemin Öz, who prepared the report, explained the changing and unchanging situations of LGBTI+'s in sense of human rights, new situations that emerged comparatively to the previous years' reports and the new agendas of LGBTI+'s:

"The monitoring report, which we tried to assess the positive and negative aspects of LGBTI+'s human rights in a holistic manner, also revealed that there are significant developments in the practices regarding the human rights of LGBTI+'s and in court decisions related to the LGBTI+'s; nonetheless the enactment process of these court decisions still needs to be monitored. In 2019, almost every human rights category of LGBTI+s has been heavily violated. Compared to previous years, there was not much change in the number of violations committed by society or individuals, while there was a significant increase in violations caused by public authorities compared to previous years. It is possible to read this as a reflection of public authorities' discriminatory and scapegoating rhetoric against LGBTI+'s. In contrast, the number of LGBTI+'s that applied to the legal system against the rights violations continued to increase. Since there are no special regulations in Turkish law regarding the LGBTI+'s, they continue to not give up their strategy to create their own legislation by seeking their rights against all violations, barriers, and pressure through legal applications and lawsuits."

The report covers a total of 72 cases in the field of LGBTI+'s human rights in 2019 in line with the applications and information received by the judiciary authorities, press, or directly by the Kaos GL Association. There's often more than one violation in these cases. The total number of violations/cases addressed in the report is 134

The report seeks to address all developments in the field of LGBTI+'s human rights in 2019 by including the cases evolved into positive processes where justice has been served.

The distribution of cases and violations according to their relevant categorization is as follows;

The overall situation in the report is summarized as follows:

“When the cases covered in the report are examined, it will be seen that in 2019, the intensity of rights violations against LGBTI+s was retained. Violations against LGBTI+s have become more visible and there was an increase in the legal actions against violations. Positive developments were still limited in 2019. There was an increase in violations that originated directly from authorities and law enforcement. Meanwhile, the number of violations from the public continued to intensify. However, while there have been significant improvements in the access of LGBTI+s whose rights were violated to justice and compensatory mechanisms, it is undisputed that they are far from the required level.

“As mentioned in previous reports on monitoring the human rights of LGBTI+s, there is no regulation in the Turkish legal system that protects LGBTI+s, and no public policy has been established in this field. Policy-makers and practitioners themselves might become the perpetrators of the violations at an increasing rate. The approaches of authorities using discriminatory rhetoric are being reflected in public policies in the form of an increase in unfair practices against LGBTI+s.

Torture and mistreatment is on the rise in 2019!

The report also compares violations in 2019 to 2018. Accordingly:

●      The number of violations in the areas of Torture and Mal-Treatment, Freedom of Speech, Meeting and Demonstration Marches, and Freedom of Residence, and Movement-Right to Property has increased severely.

The report outlines violation categories and headings as follows:

*Right to Life and Hate Murders Against LGBTI+ People.

*Hate Crimes
*Hate Speech
*Gender-Based Violence
*Ban on Torture and Maltreatment
*Personal Liberty and Security
*Freedom of Speech
*Right to Assembly and Demonstration
*Right to Work
*Right to Education
*Right to Health
*Freedom of Residence and Travel – Right to Property
*Access to Goods and Services
*Right to Reproduce – Legal Status for Intersex People
*Right to Marry and Found a Family
*Right to Social Security
*Rights of Prisoners
*Rights of Foreigners, Refugees, and Migrants
*Right to Political Participation
*Right to Benefit from Scientific Progress
*Right to Information
*Compulsory Military Service

In addition to these topics, the report also includes the decisions and practices of the Human Rights and Equality Institution of Turkey (TİHEK)  and the Ombudsman Institution. This situation is explained as follows:

“In our 2019 report, unlike previous years, we preferred to examine the decisions and practices of the Turkish Human Rights and Equality Institution and the Ombudsman Institution in detail under separate headings. Although both institutions were established and assigned directly to monitor human rights violations, discrimination, and unlawful public practices, we have seen that both institutions implemented discriminatory decisions and practices when it comes to LGBTI+s and that public institutions tasked with addressing rights violations could take LGBTI+ exclusionary approaches in practice.”

“The LGBTI+s who founded today, are a democracy, equality, and road story for all the victims of discrimination”

The result section of the report includes the following assessment:

“LGBTI+s of Turkey, who has undergone a period of intense pressure and prohibition by the public authorities, still do not give up the fight to develop their areas of existence with the influence of global gains and advances in communication and expression. They maintain their belief in survival and achieving their rights by developing creative solutions even in the most oppressive periods. So our hope blossoms for a more democratic and egalitarian society that everyone will be liberated, along with LGBTI+s.

Although the information about LGBTI+s is tried to be left in the shadows in Turkey’s official history, this country also has a history in which LGBTI+s have established and expressed themselves and adopted by its people.55 Every bit of information we’re trying to produce regarding the LGBTI+s are also the bits that we are trying to protect from getting blackened out. In a Turkey where LGBTI+ identities are no longer denied, the LGBTI+s who founded today, are a democracy, equality, and road story for all the victims of discrimination.”