Lawyers discussed the achievements and shortcomings regarding gender reassignment processes. 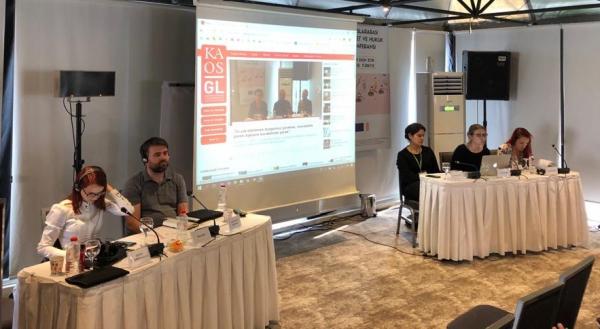 Lawyers discussed the achievements and shortcomings regarding gender reassignment processes at the International Conference on Gender and Law.

Healthcare services must include diversity

Akram Kubanychbekov from Transgender Europe: “Trans people identify themselves differently in different countries. Therefore, healthcare services have to be regulated as it would include such diversity”

Lawyer Constantin Cojocariu: “Trans people shouldn't be forced to chose either to be recognized or an intervention that they don't want, so we are trying to eliminate such conditions that violate two fundamental human rights.”

Rina Kika from Kosovo: “Although we have very strong laws, Kosovo is actually one of the most homophobic and transphobic countries.”

“Any inconformity is considered as mental disorder”

Reyda Ergün from Kadir Has University: “Positive human rights legislations are results of struggles. Therefore, the latest achievements are never the final point, and there is always a further point to reach in terms of human rights. According to law, sex is based on biology; any inconformity is considered as mental disorder; surgery is the 'cure' and after surgery such 'contrast' is corrected in official documents. Turkish legislation approach it as a disorder rather than a human rights issue.”

Lawyer Hatice Demir from SPoD: “Deprivation from their reproductive rights' is a condition for legal transition. However, hospitals cannot provide a medical report for this, so judges do not give permission for the operation. It's a vicious circle. Reproduction issues is actually removed from criteria of transition. Only Constitutional Court ruled on such disparity that this must not be sought as pre-condition before the medical operation.”

The Conference ended with a forum on 19th October.

This activity is organised within the scope of Awareness and Advocacy for Human Rights of LGBTIs Project which is supported by the EU. This does not mean that content of the conference reflects the EU's official views.

International Conference on Gender and Law has started

We need laws for equality!

Our situation regarding the jurisprudence on hate crimes

What is the impact of multi-discrimination on legal procedures?

“Our anger is a justified one”