LGBTI+s and women were in the streets all across Turkey on March 8!

Women and LGBTI+s all across Turkey were in the streets on March 8 against all the odds. 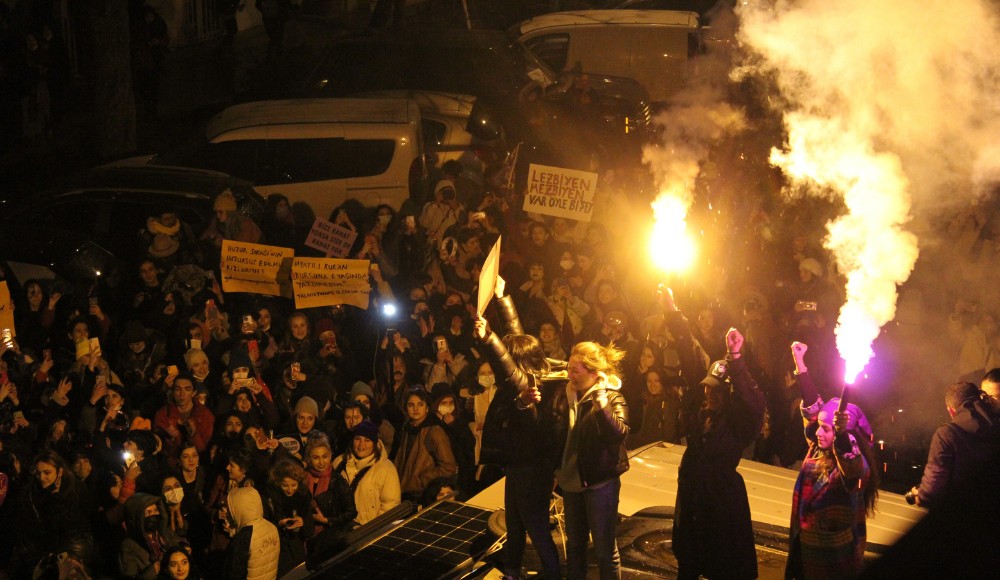 LGBTI+s and women went out all across Turkey on March 8. Thousands of feminist came together at the demonstrations organized day and night.

Ankara: “We are getting the edge over the street with feminist rebellion!”

Thousands of feminists rose against at the 16th Feminist Night March in Ankara this year. The police laid siege to Madenci Anıtı where women and LGBTI+s planned to meet, therefore they came together in Sakarya Street.

You may reach the press statement read at the march and the photographs by Aslı Alpar here.

Police violence left its mark on Feminist Night March in Antalya. Police attacked women and LGBTI+s who came together in Üç Kapılar for the march. Women read the press statement despite being stonewalled. At least 1 person was injured and 39 people were taken into custody during police attack. Detainees were released in the morning of March 9.

Antep: Newly-established Antep Queer was also in the field

Women and LGBTI+s organized a night march in Antep at the invitation of Gaziantep Democratic Woman Platform, We Will Stop Femicide Platform and  Women’s Asembly. Newly-established LGBTI+ organization Antep Queer participated in march with rainbow flag.

Women and LGBTI+s came together in Sevgi Yolu for Aydın March 8 Night March, which was organized for the first time this year, at the invitation of Aydın Women’s Solidarity Platform. They walked through Kent Square shouting slogans and with the banner written “From rebellion to resistance and resistance to freedom” on.

You may reach the statement read and the photographs of the march here. 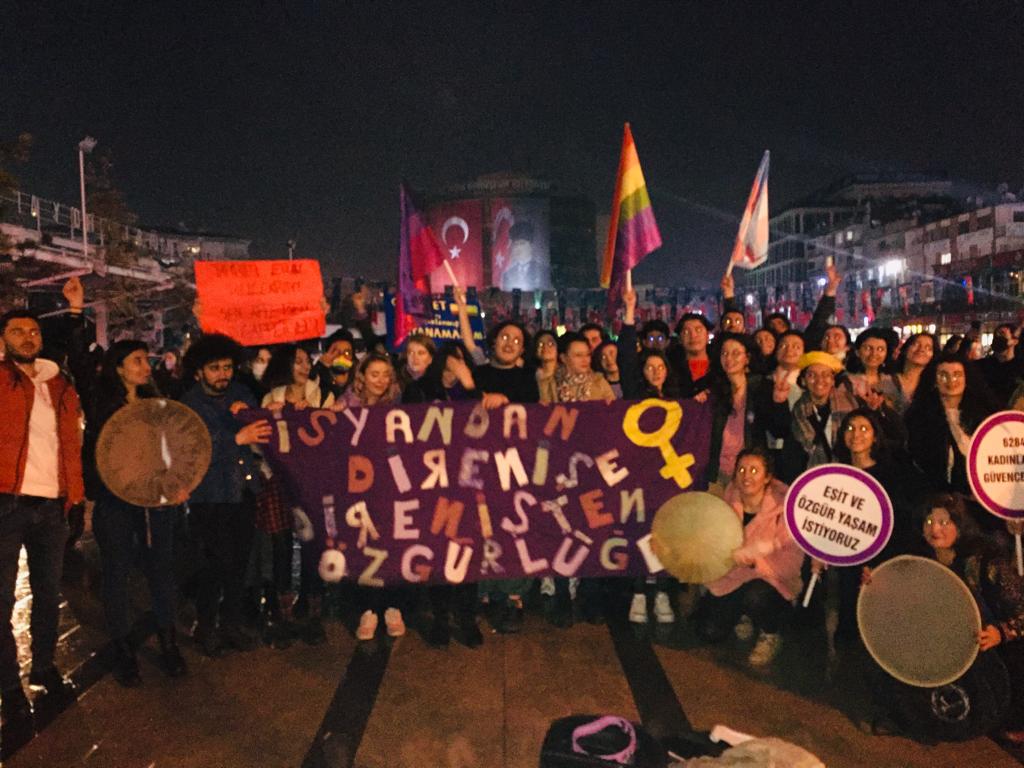 Balıkesir: Women and LGBTI+s were in the streets for March 8 in Burhaniye and Edremit

It was underlined that ever-increasing poverty and violence in the pandemic had a role in the rise of femicide at the statement read during the march:

“Many of our sisters were killed by their husbands, ex-husbands and partners in recent years in Körfez region. LGBTI+s are slaughtered as a result of growing hate speech. We shout as ‘Stop femicide’ every March 8! We mark our slaughtered friends every year. We tell how the violence has increased compared to previous years, every passing year.”

You may reach the photographs from the march here.

Women and LGBTI+s marched on March 8, International Women’s Day, at the invitation of Bursa Women’s Platform.

Coming together in Fomara, women marched towards Kent Square. “Where are you, my love?”, “Trans murders are political!”, “Lesbians or something like that definitely exist”, “Shout against homophobia and transphobia!” were among the slogans shouted during the march. 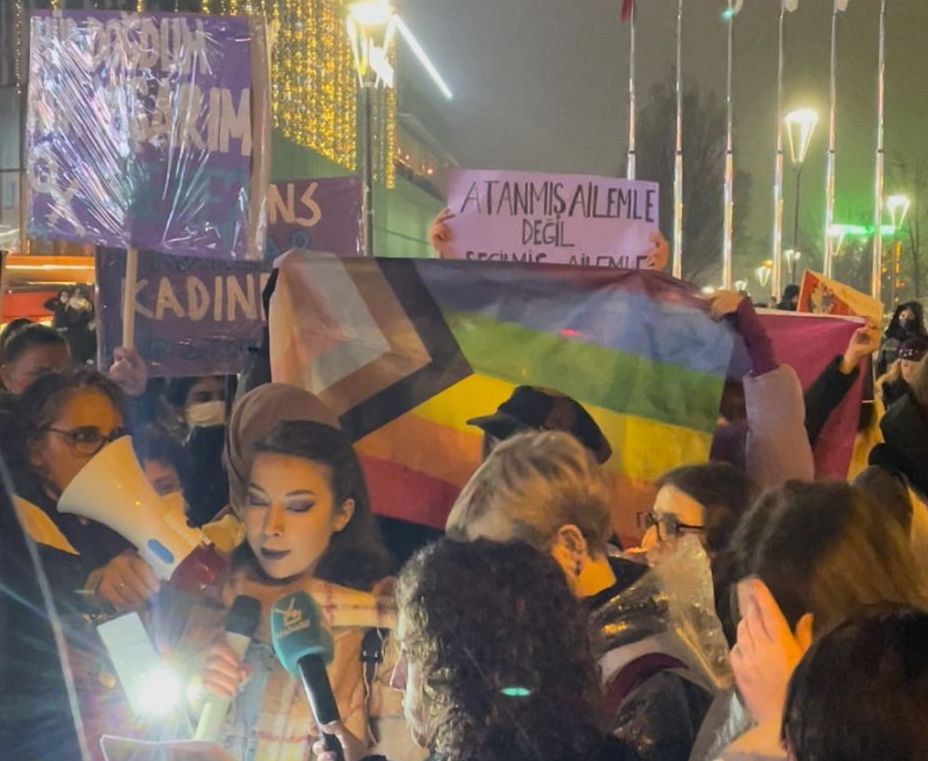 Press statement was read in Kent Square. Activists from Free Colors Association read the LGBTI+ related part of the statement::

“Attacks against LGBTI+s gradually increase, hate speech is being tried to be normalized. LGBTI+s, who are exposed to homophobia, transphobia, economic violence, are tested by poverty and driven suicide like Zirve Soylu. Pride marches are banned every year the scenes of violence against LGBTI+s come our way once again. We repeat that we will not make peace with the gender stereotypes of patriarchal system and trans murders are political!”

Women met together in İstasyon Square for March 8, International Women’s Day Demonstration in Diyarbakır. Women gathered at various parts of the city for the demonstration with the slogan  “Dem dema azadiya jinan e” (It is time for women’s freedom) under the guidance of Amed Women’s Platform (DAKAP).

You may reach detailed information and phtographs of the march here. 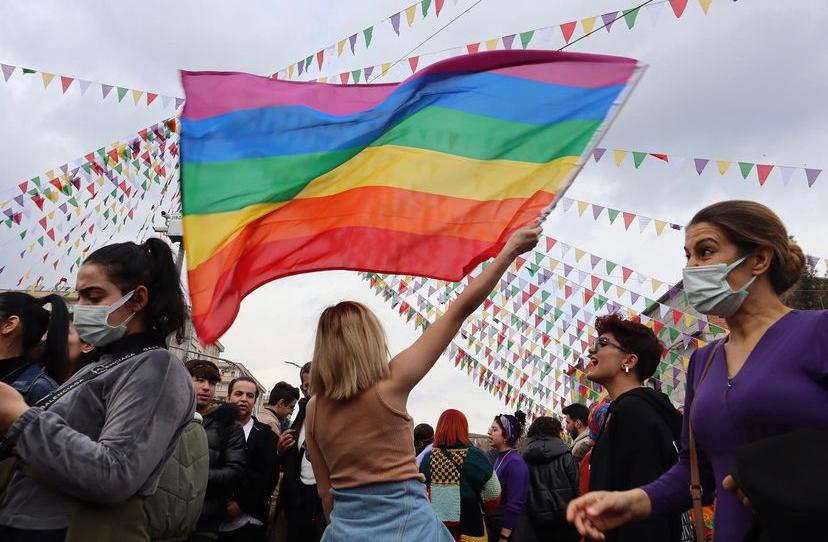 Coming together in front of Espark Shopping Mall, women and LGBTI+s marched on March 8, at the invitation of Eskişehir Democratic Women’s Platform. Following the press statement read in both Turkish and Kurdish, murdered women were marked. It is demanded that ill prisoners, Aysel Tuğluk being in the first place, to be discharged as soon as possible.

The police tried to block LGBTI+s to participate in the demonstration and teared many of placards. However the solidarity of women and queers overcame the police barrier.

You may reach detailed information and phtographs of the march here.

İstanbul: Governorship told: “We will absolutely not allow”, streets were overcrowded by feminists!

2oth Feminist Night March was banned in İstanbul by İstanbul Governorship with a written statement made on the day before the march. The effects of the prohibition started to be felt  in the early hours in Taksim, where it was planned to march.

Women and LGBTI+s came together in Taksim, where access to some roads was banned, barricades were made, some of the stations of metro was closed and the police made a blockade all around, against all the odds.

Women and LGBTI+s, who went out all across Taksim, came together in Cihangir. Following the statement read both in Turkish and Kurdish, women and LGBTI+s went on their action and celebration by staying in baraza.

39 women and LGBTI+s, who met together in Kadıköy for attending March 8, were taken into custody when they were about to take a ferry. Following the testimonies, the detainees were released.

The police also attacked the venue, where an after party was planned to be held, in pursuit of the march, and made the party canceled by blocking the feminists inside and outside. 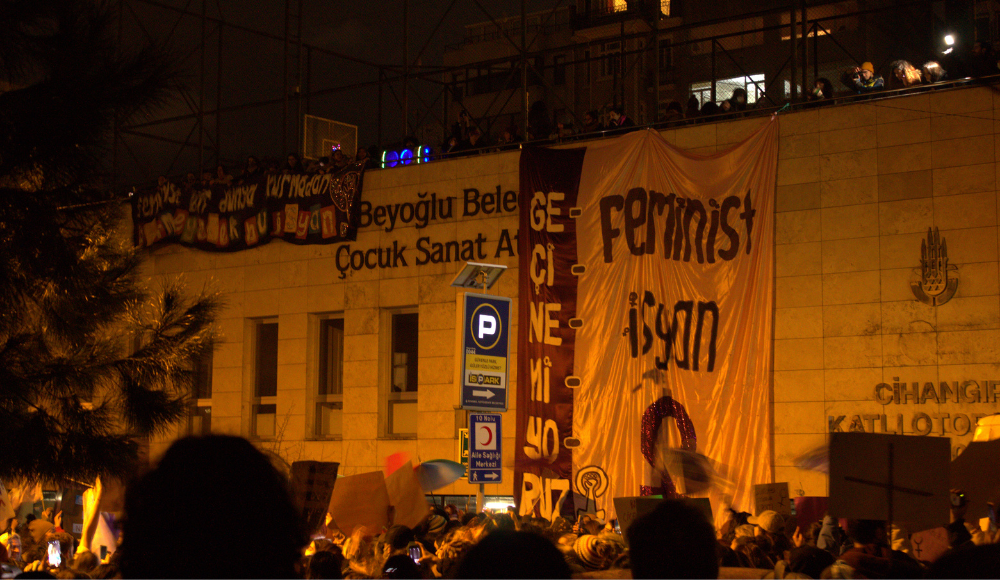 Women and LGBTI+s revolted against patriarchy and poverty in İzmir Feminist Night March. Coming from both ends of Alsancak, feminists met together in the middle of the street by breaking the police barricades. They marched along Alsancak.

Feminists shouted the slogans like “Police run away, women are coming”, “You will never walk alone”, “We will win by resisting”, “Press, press, press against barricade”, “Jın, jiyan, azadî” (Woman, Life, Freedom), “Police get out, these streets are ours”, “Police look here, calculate how many people we are” during the march.

You may reach detailed information about the march and the photographs taken by Birol Koyuncu here. 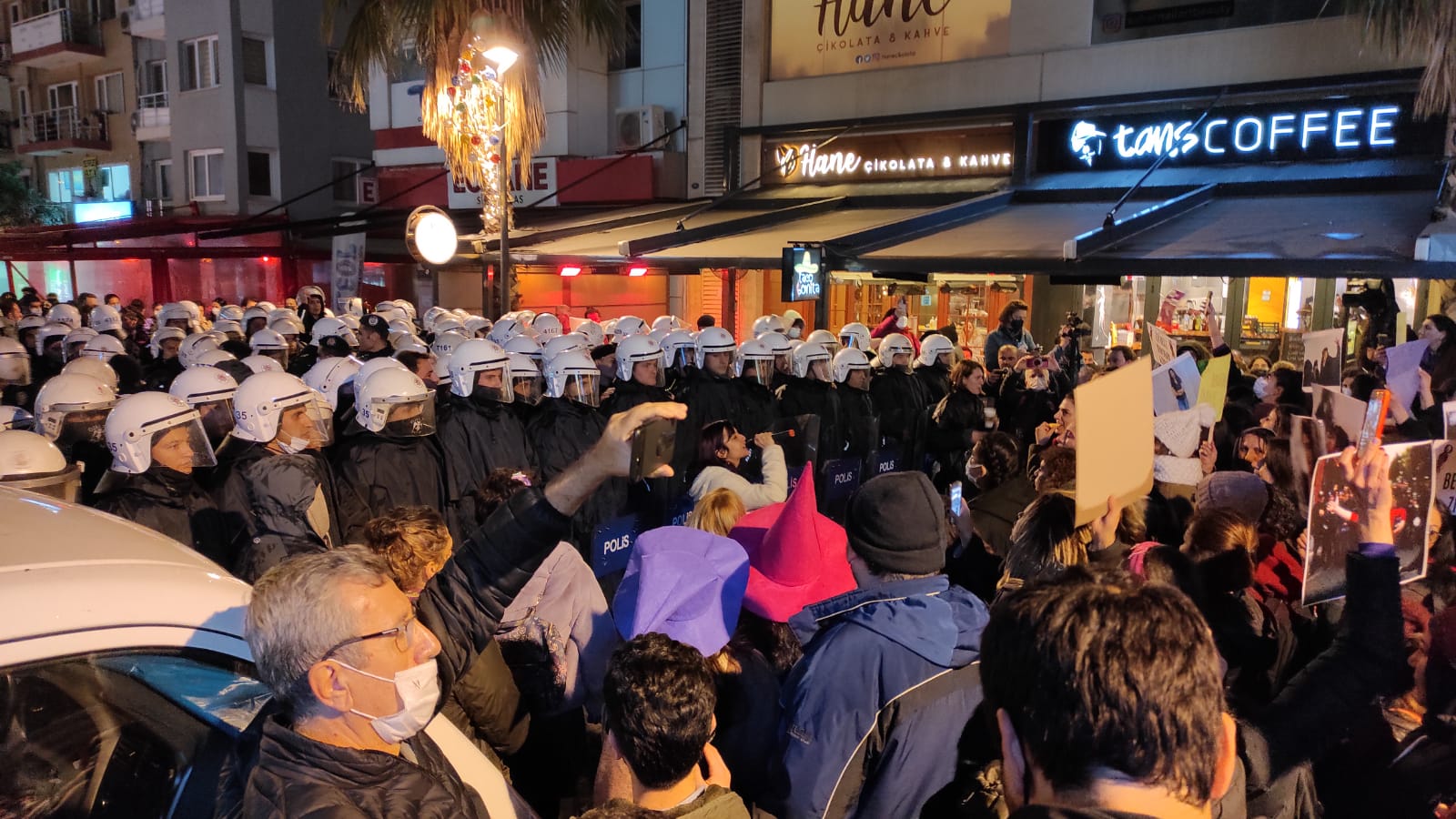 Feminist Night March was organized for the 8th time this year in Mersin. Women and LGBTI+s clamored against patriarchy, war, male violence and LGBTI+ phobia during the march.